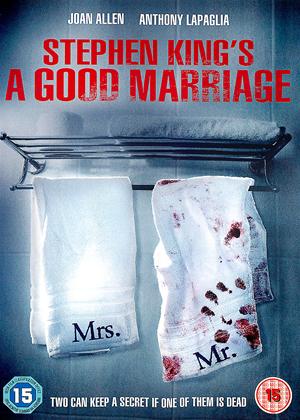 Synopsis:
Celebrating 25 years of a good marriage, Darcy feels her life is complete with a loving husband and wonderful children. Outside their lives a serial killer hunts his victims, killing young females, whilst a suspicious stranger stalks Darcy's family. Thinking bad things only happen to others, Darcy soon finds out the truth as she uncovers a gruesome reality about her husband that suddenly makes the outside world frighteningly real. Realising that her husband is not who she thought he was, his sinister secret threatening not only their marriage but also her life, will Darcy survive the dark truth that is so horrific it can't be real?
Actors:
Joan Allen, Anthony LaPaglia, Stephen Lang, Cara Buono, Kristen Connolly, Mike O'Malley, Theo Stockman, Will Rogers, Pun Bandhu, Terra Mackintosh, Robert Hogan, Sean Dugan, Danny Binstock, Kris Lundberg, Susan Blommaert
Directors:
Peter Askin
Producers:
Peter Askin, Will Battersby, Per Melita
Writers:
Stephen King
Studio:
Grimm Entertainment
Genres:
Horror, Thrillers

Reviews (2) of A Good Marriage

not a bad thriller - A Good Marriage review by gazmb

Not the best Stephen Kings story the book probably better. I enjoyed it though , a happy married couple are not as happy as you think. There are a lot of murders going on . The wife gets worried when she finds some victims identity's hidden in their garage.

As with MOST Stephen King Novels made into Movies ,Its CHEAP and has that Made for TV quality like an Episode of 'Tales from the Dark Side' or 'Tales from the Crypt' or something similar .

Mostly irritating ,because as with most Horror ,The characters Never Do What They Should or what you are Screaming at the Screen for them to do. But saying that it all Ends pretty well. just in that Long Winded and Unnecessarily Complicated way .

Entertaining enough but really ,for a Stephen King ,not a memorable experience .CARRIE or The SHINING it really isnt .

Was a short story from a Compilation and truly comes across as that , would have made an OK segment in an Anthology Thriller .

Stephen King’s novella A Good Marriage was hailed by many critics as a positive return to form for the seasoned author. I wish the same could be said for the film adaptations of his work as the appeal does not translate well to the screen. King’s condensed writing for the short story might have been well-written and evenly paced piece of literature for a common thriller premise. But this feature film pads out the mood and atmosphere to the point of boredom. Whereas other directors would take the idea of a secret life killer in new and interesting directions, director Peter Askin tirelessly extends this material so far into the land of bland it may as well be a made-for-TV movie.

A Good Marriage entertains the idea that the seemingly sane people closest to you are cold-blooded killers behind closed doors. Darcy (Joan Allen) makes the horrifying discovery that her husband Bob (Anthony LaPaglia) she’s been married to for 27 years hides a dark secret. Her visions of a simple man consumed by collecting rare coins is turned upside down when she discovers the driver’s licenses of murdered women in the garage. What’s a wife to do? She tries to hide her shock, but it doesn’t take long for Bob to realize she knows too much. But Bob assumes that Darcy will just roll with it as he calmly comes clean about his murderous alter ego. He actually pulls the old let’s-start-over out which actually works given how Bob reasons with her to maintain the marriage.

Placed in such a tense spot, Darcy just sort of rolls with it, quietly biding her time until she can escape Bob’s grasp. This would appear to be the perfect platform for conflicting emotions and painful decisions to make for a woman entrapped by a secretive killer. But Darcy, as pensive about violence as she is, seems almost catatonic in her reaction. She doesn’t overreact or display much emotion after being convinced by Bob to let it go. She even strikes a deal with him to bury the snatched ID cards of his victims in the woods as if trying to keep the ugliness behind them.

Okay, so she attempts to reason away her killer husband for the sake of her life and her kids. After all, Bob doesn’t really come across as a total psychopath or even abusive to his wife and kids. But how long can such a life of horrific realization last? We know it won’t be long, but that gritty climax comes not out of paranoia or nosy investigators. Instead, Darcy plans to bump off Bob seemingly at random. There’s nothing built up to how Darcy made the jump from empty-nest mom shocked by horror movies to strategic killer of killers. Maybe Bob and Darcy were perfect for each other in the sense that they both appear crazy in their methods of resolution.

The movie then shifts gears yet again, placing Darcy in the hot seat. But even that third act is just as dull and with no consequences. There is no grand payoff, no examination of a perplexing marriage and no grizzly examination of a killer’s mind. Everything that is promised from such a setup is never delivered or coated in a glaze of mundane. It’s also rather shallow in the way it finds such simple peace from the act of revenge with no bad karma aloud. The movie seems to be from another planet in how it takes a comforting reassurance when a detective tells a murderer “you did the right thing” with some sloppy utilitarian reasoning.

A Good Marriage fattens a thin narrative with a whole lot of nothing. Drained and devoid of emotion, it’s hard to really care for anyone or their actions in this bland farce. All that’s left on screen is Stephen King’s words spat out with cheap acting and dull visual interpretations. No suspense, no twist and not even a bit of decent cinematography. There may have been a message in here somewhere about the dreariness of married life, but it’s never addressed. The film is far too interested in just skipping ahead to a wife beating her lying husband to death.