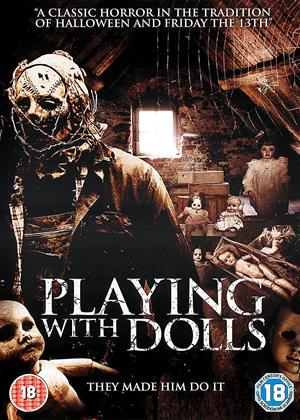 Synopsis:
A group of aspiring actors are chosen to be on a reality based TV show where they have to face the thrills and scares of being in a Slasher Horror movie. They are taken to a remote cabin, which is equipped with scores of tiny cameras. What the contestants don't know is that the Slasher they're facing is a real psychopath who has been purposely let loose. Their reality show is real and the Slasher is on a bloody rampage. The contestants are in for the fight of their lives and the only prize for winning is survival. The games have begun and inside a fortress like control room, an insane game master watches the footage as life and death play out for his amusement.
Actors:
Natasha Blasick, Richard Tyson, Charlie Glackin, Alanna Forte, David A. Lockhart, John Scuderi, John Welsh, Allisun Sturges, Sean Story, Lisa Collins, Haref Topete
Directors:
Rene Perez
Producers:
David A. Lockhart
Writers:
Barry Massoni, Rene Perez
Studio:
Miracle Media
Genres:
Horror

Reviews (1) of Playing with Dolls

Sometimes, when there is a lack of budget, infusing a film with a sense of dark humour can compensate. It seems to me that director/writer Rene Perez embraces this and never lets his production take itself too seriously. This filters through to the actors too, who may not be truly convincing, but seem to be enjoying themselves, and that enjoyment is somewhat infectious.

The storyline is also suitably odd. A group of four financially embarrassed wannabes are brought together to take part in a reality television show in an expansive shack in the middle of a deep forest with no internet, and no signal for cell phones. As the gravel-voiced hostess announces, it is best not to set fire to the house, as there will be no-one remotely near to put it out. What would health and safety say? And yet, there is someone watching, a chain-smoking, well-dressed millionaire type (played by Richard Tyson), who observes all from a variety of cameras dotted about the place.

Back to this, and the two star-struck females Stina (Karin Brauns) and Nico (Elonda Seawood) are quite clearly hired for their physical (and surgically enhanced) looks, but then, if this really was a reality show, then that would be true to form. The girls are empty-headed but quite likeable. The killer, who appears not be an actor, but a real murderer – in which case, do the producers know this? – pops up from time to time and dispatches people and bizarrely, remains unseen by the rest.

The further we get into this, the less I understand it. Here’s a spoiler: Trina, the last survivor, is told she has won the prize of a million dollars. What does she think has happened to the others? Clearly she’s not bothered! Sadly, no-one seems to have told the killer, who ties her up and begins to torture her in some pretty grisly scenes – after which, he gives her a hearty pat on the shoulder!

Colin Bryant, who is hugely built, plays Magnus, the hero. In another spoiler, he hasn’t perished after all and he and Stina elect to fight the masked killer. A couple of minutes into the scrap, watched by Tyson … the end credits roll! Is this a cliff-hanger or did they just run out of money?

Despite the head-melting incomprehensibility of it all, I really rather enjoyed this. The direction is good, the masked killer looks formidable and there are some very gory moments. The weirdness of it all convinced me to keep watching to see what would happen next. A project that relishes its own oddness.