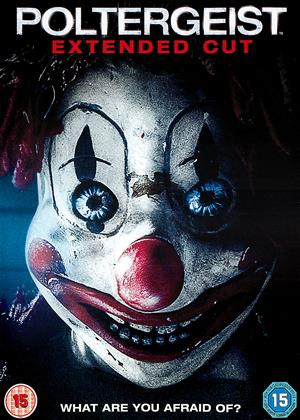 Its really just a remake, exactly like the first film though, I would of thought they would of tried to make things better or there's no point in doing it. All it is , is a modern version , but sadly it doesn't seem to have any tension or suspense in the film like the original film.

I vaguely remember watching the original version of this on television many years ago. The only abiding memory I have is of a little girl mewling ‘They’re coming,’ and a television screen dancing with static. So on that basis, I have nothing much to compare this remake to. It begins with that most frightening thing: the wholesome family unit!

Dad (Eric played by Sam Rockwell) is initially something of a twit but we warm to him as time goes on; mum (Amy, Rosemary DeWitt) tolerates everything with a smile; the teen daughter (Kendra, Saxon Sharbino) is constantly bored, growing up to look perfect and is spitefully sardonic and unbearable unless she gets her own way; the young son (Griffin - Kyle Catlett injects a refreshing earnestness into his character) is the best of the lot: un-sporty, polite and reserved, and the little girl (Maddie, Kennedi Clements) is a typical drama student juvenile. No more, no less. The paranormal investigator Carrigan Burke (Jared Harris) called out to investigate livens things up.

The encroaching possession elements are handled very well. Apart from the cartoon-ish CGI tree terrorising Griffin, most of the effects in the house are real and physical (the finale very much the exception). The camera pans round a bedroom full of everyone sleeping as all the electrical items crackle on and off of their own accord. There are loud bangs and musical stings. And not one of these things is remotely frightening. What is guaranteed to squash the effect is the almost constant accompaniment of screaming children – which may be something I might be in the minority having any kind of problem with.

I would say this is as competent as it can be, with a spectacular finale. It doesn’t appear to tarnish the high reputation of the original, but doesn’t take any particular risks with the format either.

The full effect of a horror film mostly comes from not knowing what to expect. Poltergeist lacks that tension as a remake that plays to all the expectations of its predecessor far too exact. The trees that smash through the windows to grab you? They’re here. The portal in the closet that sucks in all the contents of a bedroom? That’s here. The creepy clown that reaches out to grab you? He’s here. That key phrase when the daughter touches the television screen? You better believe that’s here. But if you’re expecting any of those scenes to be divergent or improved, you are in for one major letdown.

Similar to how Gus Van Sant treated Psycho, nothing about this new Poltergeist seems to warrant a modern remake. It was clearly an easy choice for all its marquee value. Haunted house movies are in vogue and teenagers love going to a PG-13 fright fest. But this still begs the question of why a new Poltergeist had to be brought to cinemas. There’s some decent talent on screen (Sam Rockwell, Rosemarie DeWitt, Jared Harris) as well as behind the camera (Sam Raimi, Gil Kenan). But the result is more of a lackluster experiment in seeing what today’s actors and special effects could do with a pale rewrite of the original Poltergeist.

While the original director Tobe Hooper brought a genuine terror and thrill to a suburban family being haunted in their home, Gil Kenan does little to inject that spirit he had with Monster House. The creepy factor of the original’s creative effects and surprising scares has been replaced by the cheap tactics of modern commercial horror. The family living in the house is never given much character. The father is struggling with money after being laid off, the mother is concerned about losing touch with her kids and the kids are just your stereotypical visions of cute youngsters and snotty teenagers. It’s the bare bones of establishing characters who will become targets for the ghosts (likable though they may be).

The modern dressing of the scares are rather laughable given how hard they try. The clown toy that comes to life and strangles Griffin (Kyle Catlett) is all dolled up with evil eyes and sharp teeth. The scary nature of the original clown toy was that it looked like a normal clown toy that appeared sinister in the darkness. With this 21st century version, we can only assume that the clown is a product of hell as it stands out like a sore thumb next to the other normal looking clown dolls. Seriously, dolls are scary enough on their own. Throwing on extra spooky features like that is akin to throwing on too much makeup (similar to the Annabelle doll).

There are at least a few scares that appear technically competent though completely ineffective in their intention. The tree branch that breaks through the window and pulls out children is maintained through a long take of going through the hallway, into the bedroom and out the window. It’s not the least bit frightening, but echoes Raimi’s signature camera work. Some real craft is applied to the portal to the other side and the way it violently sucks in the room and destroys the house.

But the rest of the film is mostly relying on the old standby of jump scares. What I found rather amusing is that all these modern horror films have pulled out every jump scare in the book that none of them even made me jolt in surprise. Maybe it’s the swelling of the soundtrack or the fact that it’s playing to all the expected frights note for note. Seeing this film in a theater, nobody appeared all that frightened or engaged with the picture - merely holding their hands over their faces for the expected jump scares and nothing more.

For those who have never seen the 1982 classic, Poltergeist may generate a few mild scares. For those who have seen the original, they’ll be constantly asking why they’re watching a watered down version of a legendary horror picture. The remake can best be summed up by the classic line in which the daughter remarks “They’re here.” The creepy slow delivery is replaced with a nonchalant utterance. Much like the ghosts of the house, this picture has no business in the current climate of commercial horror. Condemn thy franchise back to the grave so it may find peace and be fondly remembered for its one great film.