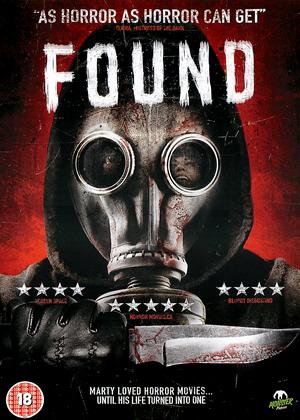 Sticks in the memory - Found review by BG

'Found' is a tough title to review.

Therefore it's probably best to look at it piece by piece.

'Marty' (Gavin Brown) opens the film by telling us that his older brother kills people, and that he's found heads in his brother's bowling ball bag. This is the kind of reveal most horror thrillers would keep for the middle of the movie. For some reason, Director Scott Schirmer and writer Todd Rigney decide to lead with it, and although it's a bold choice, it means that our interest is seized by the opening and then allowed to plateau as we're introduced to the rest of Gavin's life: being bullied by his fellow pupils at school, hanging out with his friend David, listening to his Dad and brother argue, and being dragged to his mother's religious group.

The film emphasises pretty heavily how unfair and unsavoury Marty's life has become, meaning that for much of the film you're either watching him get bullied, get side-lined, or worry about where his brother's disturbing secret life is leading. It's grim stuff, and there's almost no humour to leaven the effect. Unfortunately there's also not enough acting talent to grip us with the drama of it; - the film is inconsistent in almost every respect. The quality of writing is extremely variable. In one scene we're subjected to extremely poor and uninventive dialogue between Marty and his friend, or Marty and the bullies, only for a later exchange between the brothers to feel better written and more nuanced. The direction also varies between awful (almost every fight scene with the bullies is shockingly unconvincing and so badly directed that you can plainly see shoves don't land or get pulled at the last moment) and attempts at inspiration (one field-crossing in the sunset is clearly aiming for arty but never gets there. The acting is also often terrible (every kid under 18 except 'Marty' is pretty appalling) and not one cast member genuinely shines. However, Ethan Philbeck is just unsettling enough as killer older brother 'Steve' that you find yourself fairly convinced by his see-sawing between fraternal and chilly/psychotic.

But this is a film where they've worked out that they're never going to win awards with the acting or script, so have gone full-bore on the nastiness (including some rather ham-fisted racism that feels oddly out of place with the characters, and as a result feels even more offensive because it feels shoe-horned in to cause offence instead of being 'true to character')

If you're wondering why it has a persistent reputation as unsettling, despite all of the flaws listed above, it's because of the following: -

the middle section, where Marty and his buddy watch some 'horror films' includes one 'lost videotape' that is so relentlessly unpleasant and in such bad taste that it pulls very few punches in the way of atrocities, including heavy lashings of gore. The ending, despite having much of the nastiest stuff happen (quite effectively) off camera, also ramps up the nastiness and unease, with several very transgressive things suggested and then a pretty good helping of gore.

'Marty's slide into disillusionment and resentment at how he's treated combines with the escalating unease that you might be approaching a rather nasty climax, and you end up with a film that can be safely described as nauseating, depressing and upsetting, as well as patchy and ham-fisted. It's a strange combination that can't really be recommended, but which gore aficionados are probably going to want to see anyway.