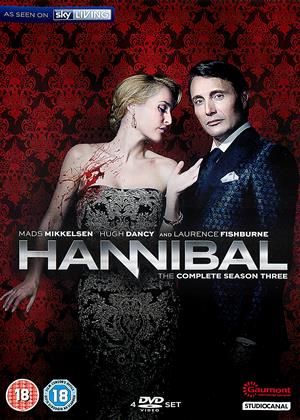 After The Lord Mayors Show - Hannibal: Series 3 review by RP

The excellent second season was always going to be a hard act to follow. The cliffhanger ending to so many characters made it must watch if a little gory tv. However this third season is almost split into two. The tidying up loose ends takes up much of the first half of the season. Even then we are left with the style over substance of slow motion pouring of wine and cutting of meat. There are also too many moments of dialogue like ' But why didn't you kill him when you got the chance'. Yes we are all asking the same question.

Second half of the season introduces the new baddie. Those familiar with the films and books will know that The Tooth Fairy or The Red Dragon enters the show. Slightly unconvincing and the usual plot of lets live in an isolated shack when danger emerges. Still If you put any credibility built up in the first two seasons aside. This is just about a good watch if a little underwhelming.

So-so Finale to a Decent Series - gets a bit silly. Set in Florence (first half) then gets dull. - Hannibal: Series 3 review by PV

I thoroughly enjoyed series 1 of this and series 2 as well. This, however, is where the series declines.

It is almost 2 series in one. The first half is better, set in Florence, a beautiful city I know well and have visited 3 times, so I sightsee as I watch! Of course, this has already been covered in the movie Hannibal (2001) and there is thus a strange overlap.

In the movie, Pazzi ends his days at the old town hall - in this, the building is not that. The Pazzi police inspector is allegedly a descendant of the real family annihilated by the Medici after a late 15th plot, though the Pazzi chapel is still by Santa Croce, the black and white shed-like church where Michaelangelo has his tomb and overlooked by Hannibal's apartment in this series). No idea which is loyal to the novel. But this half is fun with the usual deceptions and grand guignol.

tbh Anthony Hopkins in the movie Hannibal was better, more dangerous and threatening, with evil and malice. Mads Mikkelson's Hannibal is all dandy charm. A great cook though!

The second half tried my patience. It reverts to the Red Dragon book and movie, and rewrites it. No idea again which is loyal to the books. I found this half really weak, silly and actually dull and boring - which is quite an achievement when one is dealing with gruesome serial killers. It plays psychological games - as it has to, as Hannibal is otherwise engaged so cannot kill himself - much... All about mind control. And the bit with the blind woman of colour and a tiger...I mean, why? Yes yes blake wrote a poem called The Tyger, but...

The final part made me wince - it is actually very silly. JUMPS THE SHARK - esp in the final episode. No spoilers but I just do not buy it AND again, it is different from the films. There is an epilogue at the end of the final episode too so watch the credits - it's a taster for series 4 which was planned but never happened. Falling ratings for series 3 meant the TV company cancelled it. I am not surprised looking at this.

Having said that, GREAT acting as ever from everyone; very clever decent brooding dialogue too, esp how the writers incorporate lines from the movies into what various characters say (eg 'tick tock'... and many more)., Great attention to detail in all series of this and I love the advert-like interludes too.

Very bizarre how they all pronounce Jac-OH-bi though. Derek JAC-obi will be baffled.

So 3.5 stars rounded up. Enjoy series 1 and 2 especially, and the great movies.