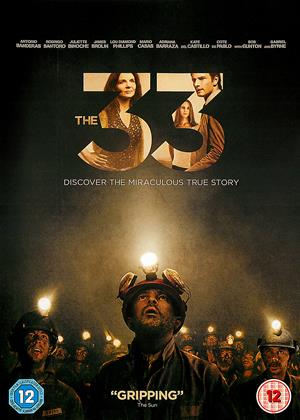 This is a workmanlike retelling of the true story from 2010 about the 33 copper miners who were trapped deep in a mine for 10 weeks before being lifted to the surface.

It does what it says on the tin really. There is the build-up to the mine collapse; then the collapse itself; then the men trapped and waiting for help, and what's happening on the surface.

All fine and good. But I do have to say I found it oddly cold really and didn't find I cared much about any of the characters. Maybe because there are so many we can only know a few scant details of the lives of each of them.

Various subplots and backstories pad this out - alcoholism, affairs, a baby on the way etc. I particularly liked the way the film showed the Chileans being racist against a Bolivian immigrant. We often assume racists can only be white Europeans! Nope. Racists can be any colour and from any culture and country (Asia, Africa etc).

I did not like the movie largely ignored the fact Chile, like most Catholic South American societies, is deeply divided with a tiny elite (shown in the President and Mines Minister here) who own EVERYTHING, and the people who own next to nothing. Compare to a protestant property-owning democracy (from British culture) which exists in the USA.

I have a connection with this film. I live in the Welsh city which in the 19th century produced 80% of the world's copper. Ore from Chile was imported here - especially from Valparadiso. Trivia fans should know Catherine Zeta-Jones' great-grandfather captained a ship which sailed the Wales-Chile route. We also got ore from Cuba and elsewhere - but Chile has a particular connection to Swansea, Wales.

James Horner's last soundtrack too and the movie is dedicated to him.

In 2010, 33 miners were trapped deep underground after an accident at the Chilean San Jose mine. Five years later, they’re given exactly the type of inspiring true-story picture you’d expect from hollywood. It plays up all the heartwarming and nail-biting moments of a survival movie without any genuine surprises. But for all its routine and flawed decisions in staging a docudrama around such an event, I have to admit that this one managed to get to me thanks in part to a faithful script and great performances. The heart was in the right place, even if it was buried under several more feet of cliches than these poor miners were with rock.

Director Patricia Riggen takes us through all the necessary beats of this tale of hope. We get to know a handful of the miners and their leader Mario being played effectively by Antonio Banderas. None of them really steal the show, but they’re all likable enough to root for. We see the cave-in as a tragic spectacle of men being buried alive in rocks and dirt. And from there the audience is caught up in watching the men on the surface scramble to drill down for a rescue while the men below struggle to survive for days on limited resources.

There isn’t a whole lot of character drama with the 33 men below despite some arcs that could’ve easily been expanded for this narrative. One of the miners is expecting a baby and the other is having issues with his wife and mistress. On the surface, the women bicker and cry about losing the men in their lives. None of which is harped on all that much and with good cause as it could’ve easily gone over the top with its melodrama. More attention is given to the mechanics of getting the men out as engineers and politicians struggle to find the best way to drill down and rescue. The powerful drills they use to tunnel into the earth find themselves veering off course. And once they find the miners, there’s still the issue of getting them out.

That doesn’t mean that Riggen doesn’t take a few liberties at crafting some drama to save us from the monotony of the rescue effort. At the final meal of the miners when their food finally runs out, all of them use their imagination to find themselves surrounded by their loved ones for a grand dinner of their favorite dishes oversized. It’s ridiculously fantastical in its splendor of imagination and, of course, manipulative in trying to place the audience inside the mind of the miners.

But that’s the name of the game with a picture that wants to push hope and forgiveness as forcefully as it can. For many viewers, this is going to make the picture perhaps a little too pushy to reach that level. At other times, there’s a confusing tone as upbeat instruments play over moments of lonely depression and the ending text about how Chile avoided any big charges for the incidents. It’s a rather depressing way to end the picture which is thankfully countered with footage of the real miners that survived such an ordeal.

The 33 teeters on the brink of overly-produced melodrama and an inspiring tale of survival. More often than not, the movie managed to win me over more than it made me sigh. Call me a sucker, but the plight of the miners was felt thanks to the focused pace and some great performances. It will entertain on the base level of a crowd-pleasing rescue operation, but won’t delve any deeper into whatever personal or political examination there may be. At the very least, it will make a more mainstream attempt to convince the audience that mining sucks and is probably one of the most dangerous jobs on the planet.