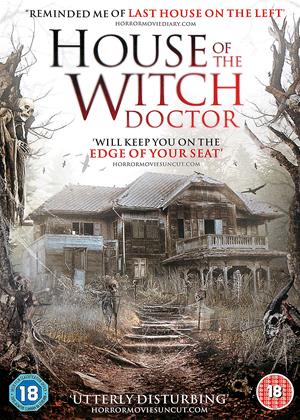 Synopsis:
Evil wreaks pure havoc in this entertaining, edge of your seat horror thriller. When Leslie (Callie Stephens) and her school friends take a trip to her family's isolated estate they are planning a quiet weekend, but the peace is shattered by the arrival of two criminals. As horrifying acts begin to unfold the criminals soon realize that all is not as it seems in the house, and when strangers from the local town show up the tables are turned, and everyone realizes that death may be the only escape from The House of the Witchdoctor.
Actors:
Bill Moseley, Leslie Easterbrook, Allan Kayser, Emily Bennett, Callie Stephens, David Andreiw, Nick Bastounes, Summer Bills, Gregory Geffard, Steffie Grote, Jonathan Helvey, Howard Maurer, Danny Miller, Susan Monts-Bologna, Kelly Owens, Dyanne Thorne, David Willis
Directors:
Devon Mikolas
Producers:
Larry Skorniak, Mark Vadik
Writers:
Devon Mikolas
Aka:
House of the Witchdoctor
Studio:
High Fliers Video Distribution
Genres:
Horror, Thrillers

Reviews (1) of House of the Witch Doctor

This is an entertaining home invasion film, in which a major plot revelation is given away by the title. What I enjoy about this is that it does something different with a familiar idea.

The plot involves a group of youngsters. Two couples and Becky, who has invited her friends to stay at her home on the anniversary of the death of her boyfriend, have their get together spoiled by two violent criminals who are intent to, in their own words, ‘get high and **** these b*****s’. These two antagonists are played in a genuinely entertaining way, and relish telling the youths (and the audience) exactly what villainy they intend to get up to. There’s also a surprising amount of topless nudity on display. The profanities are also worth mentioning, as their copious usage is guaranteed – guaranteed, I tell you – to have you laughing out loud.

There’s something else afoot too. Something worse. And that’s as far as I’ll reveal here, although once again, the title will give you a sizeable clue.

As ‘House of the Witch Doctor’ rolls on, there is a growing feeling that it isn’t meant to be taken entirely seriously. I’m not sure whether or not the final revelation tips things too far into absurdity, but the mood of the film has gradually become so extreme by this point that it is difficult to resist.

Great fun, with its tongue firmly planted in its cheek. My score is 7 out of 10.