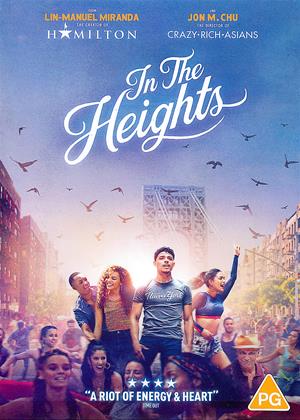 Reviews (2) of In the Heights

In the Heights is a very pleasant surprise in a world of endless sequels and reboots; it's a true original with lots of its own ideas. Throwing the spot light on the NuYorican community of Washington Heights in Manhattan, this has several characters with positive aspirations and ideals to follow. This wins for energy, it's charming leading man, great dance numbers and quite a lot of flare. Where it failed for me, was the lack of story thrust, and the sheer number of songs it packs into its running time. None of the songs stuck in my head like in other recent musics like The Greatest Showman, and La La Land, but the set-pieces are largely memorable. The dance in the swimming pool to celebrate a mystery lottery win is stand out, and a ghostly life-story told in flashback sepia tones is also great. The story isn't very original and the running time is excessive but the focus on Puerto-Ricans is interesting and largely new to a British audience. In The Heights is an awesome feel good movie that deserves an audience, although I feel it won't endure as much as those I mentioned above....

Heights of pleasure - In the Heights review by TE

This is a joyous musical, full of energetic dance and song, a parade of simple visual pleasure.

All too often the description of a film as "a feel good movie" means that it is the bland and boring equivalent of so called 'easy listening' music. Here, however, the freshness and slickness of the whole film creates a genuinely 'feel good' factor.

What's not to like about watching a fantasy version of the shiny, happy people of New York's Latino community do their thing? The dance sequences alone are fabulous.

In the Heights review by Mark McPherson - Cinema Paradiso

In the same way that songwriter Lin-Manuel Miranda gave exuberant musical life to Hamilton, here he gives New York’s Washington Heights a charm and personality all its own. His mastery of lyrics and beats transforms the Latino community of the area into another world, alive with music in everything from the latches on doors to the stomps of the streets. Adapted by the vibrant director Jon M. Chu, it’s a perfect beat-the-heat summer musical that I never knew I wanted.

The film follows the life Usnavi (Anthony Ramos), a Dominican Republic immigrant who has grown up in Washington Heights since he was a kid. He’s hoping to go back there someday and revive his father’s beach-side bar, a dream he’s had for years, instead of managing a cramped bodega. That day is coming up sooner than he realizes, forcing him to make the tough call of saying goodbye to the place he has called home for decades.

That’s not easy considering the sense of community in the heights. His best friend Benny (Corey Hawkins) has a way with a microphone, making his job as a taxi dispatcher seem less like a dreary desk job and more like a recording studio for a rising star. His cousin Sonny (Gregory Diaz IV) has helped him run the shop for a few years and maybe ready to handle it on his own but Sonny has more pressing problems on his plate. Vanessa (Melissa Barrera) has a woman Usnavi has admired for so long but never quite got the chance to ask out the salon stylist who is struggling to become a fashion designer.

Everyone in this block has hopes and dreams that speed through hills and valleys. One of the most conflicted is the prodigy of Nina (Leslie Grace), returning home as a college dropout. This prospect angers her father who wanted the best for her but pleases Benny who believes this may be his shot to confess his love. So while Usnavi is hoping to leave Washington Heights, Nina is hoping to return, trying to find some purpose in her life.

In the tradition of grand musicals, In The Heights is a bustling story with great joy and heartbreak. Good Morning Usnavi is one of the most stylish numbers that does a fantastic job giving the neighborhood its unique character. The somberly nostalgic melody of Paciencia y Fe is by far the most tragic, as Usnavi’s dying Abuela (Olga Merediz) looks back on her life of coming to America and asking if she’s ready to go into the next life.

The many musical sequences are all bursting with elaborate choreography. One of the most fascinating in terms of scope is when the neighborhood ventures to the pool as news breaks that somebody in Usnavi’s bodega had purchased a winning lottery ticket. As everyone scrambles for their ticket at the pool, dreams are confessed about what each person would do with $96,000.

But the most visually stimulating of all sequences is without question the final duet between Benny and Nina. The two confess their love for each other as they dance up the side of an apartment building. It’s so cleverly staged that some moviegoers may believe it to be some twist on the special effects of Inception even though it feels far more like an ode to Fred Astaire’s dancing on the ceiling in Royal Wedding. Whatever the inspiration, it’s a beautifully whimsical sequence that more than warrants the adaptation from the stage to the screen.

There’s a lot of cultural aspects to dig into with the film as well, considering it touches on everything from immigration to gentrification, but I’ll back off of this area to maintain a certain sense of surprise for those watching for the first time. The bottom line is that In The Heights is an irresistible musical that is sure to make even the most jaded of viewers feel a beat in their pulse. One of the best films of 2021.