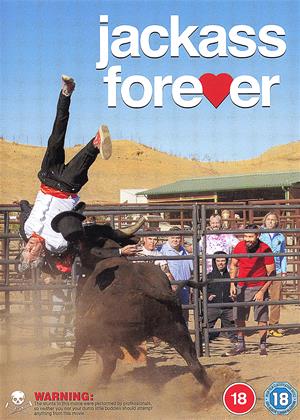 The Jackass crew joke in their fourth movie about their first film from the early 2000s ended with them predicting how they’d perform these stunts when they're older. They speak of this bit more with a grin, remarking on how they’ve aged gracefully and went on to take several more daring and dangerous stunts, be it an animal attack or a punch to the groin. Considering some of their more physical bits involved getting hit by bulls and getting shot out of cannons, they’ve held up pretty well. Their films still hold some appeal as well.

Consider the opening sequence for Jackass Forever, where one of them uses their penis to stage a kaiju movie, complete with a miniature city and elaborate effects of explosions and semen. Juvenile? Absolutely, but well within what is expected of these pictures. And, really, when has there ever been something so brazen and clever as a penis-puppet monster movie on the big screen? To even attempt such a bit is great but to see it come together with great absurdity is just brilliant.

The series of bits that follow never really made me laugh but they did hold my smile and kept me snickering. Johnny Knoxville performing the flight of Icarus by launching out of cannon with wings is as alluring as it is hilarious watching him soar to ridiculous heights. Steve-O taking a swarm of bees to his penis and balls is quite hilarious for the reaction of a dude who is no stranger to such encounters (remember his show WildBoys?). Chris Pontious never wastes an opportunity to perform something elaborate with his penis or throw on a dress and/or bikini. Wee Man can still go flying and Preston Lacey can still be a gross-out guy in segments where he poops himself. Of course, Danger Ehren once again proves he’s the king of poop by performing his classic bit of pooping in a toilet for sale.

But, hold up, that bit sounds familiar, right? Didn’t he perform this bit in the first Jackass movie? Why, yes, he did, but there’s at least some subversion to it for the encore. This time he takes a dump at a toilet being sold at a yard sale, dropping pants right out in public. The twist: the toilet will explode while he’s on it. There are a lot of segments like this, where previous skits are reprised and improved. A fart lit underwater is finally successful. The cup test finds a sports cup being tested by a heavyweight boxer slamming Ehren in the nuts. There’s even Knoxville once more being hit by a bull but he doesn’t get up as easily this time around.

There’s thankfully a new generation of Jackass members to fill the void of the aged, the dead (RIP Ryan Dunn), and those who just can’t handle it anymore (Bam Margera). Poopies is a man willing to jump into the disgusting and I don’t think anybody among the new troupe could take a scorpion sting to the face quite like Rachel. There’s also the pleasing presence of guest stars like Machine Gun Kelly getting smacked with a giant hand and Tyler The Creator getting electrocuted while playing the piano. There are also fun cameos of Tony Hawk being doused with sperm and Eric Andre providing cackling comments.

This is probably one of the weaker of the Jackass movies but mostly just for playing like a Greatest Hits album. That being said, it’s still a lot of fun for the creative stunts and simple silliness of these buddies who have been taking punches falls, poops, and animal encounters for the longest time. They may have gotten older but they haven’t lost their innovative edge for slapstick.