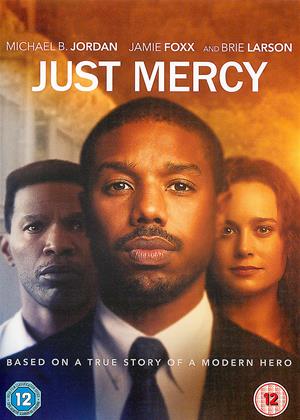 In the light of recent events in the USA, this is a story of our times. A true story which highlights the injustice of the death penalty and the corruption of the Police aided by a legal system that doesnt care.

It's a must watch in my opinion.

I have the film 4 stars not 5 because it plods along in an emotionally restrained way, with a lack of spark, maybe too concerned about veracity than drama.

But it is a real eye opener about the outrageous cynicism of the American " Justice " system brought in to even sharper focus by the Black Lives Matter campaign. Watch it.

Had to work myself up to watching this one... it was worth it, a powerful contemporary message - Just Mercy review by SB

A troubling true story told in film format, nowadays often delivered by a multi series documentary. Hard not to be angry at this tale of ongoing injustice, convincingly portrayed by the stellar cast. Bryan Stevenson, lawyer and social justice activist, who advocates for the poor, imprisoned and condemned is a true heroes of our time.

Just Mercy is a true story built to be the biggest audience pleasers. While never deeply divulging a grander sense of character from its tale of the corrupt and unjust Alabama death sentence cases, it always keeps the bigger picture in mind with the bigger speeches and scenes. What follows is a film that comes off fairly stock for the biopic treatment of a courtroom drama but also one the wins over an audience easily enough that the inevitable climax guarantees applause.

The biggest strength and weakness of this film is how it maintains a firm grip on its primary case, rarely straying away into any subplot. Michael B. Jordan plays Bryan Stevenson as a young lawyer of the Southern states in the late 1980s who seems to be entirely devoted to his clients we see nothing else. We see a brief connection with his family but, for the majority of the film, it’s all business about ensuring the death penalty is halted in dozens of cases. He’s the type of lawyer superhero one would always desire; taking on cases pro-bono and burning the midnight oil.

His biggest case is one of the most intriguing and heartfelt. Walter McMillian (Jamie Foxx) was wrongfully accused of murder and sentenced to death row. But a lot of the case doesn’t add up. Certain witnesses didn’t come forward, evidence was hidden, testimonies locked away, and some stories don’t make sense. But proving Walter’s innocence is going to be a long and draining battle as witnesses refuse to come forward and the county police become hostile intimidating. This is a legal struggle that continues into the mid-1990s.

At over two hours, the film is somewhat slow-paced in that it takes small breaths between being so entrenched in the case, yet never takes its eyes off the prize. But I wished it took some time to breathe and let the air of the era in a little more. For example, Alabama’s justice system is portrayed as racist and corrupt but in such cartoonishly easy-to-spot scenes that even the most oblivious bigot will catch. But there’s something very off about that simplistic tone one might expect out of the likes of a true story from the South of the 1950s or 1960s, making one think “wow, look how far we’ve come.” Hearing that same sentiment echoed and updated to the racism of the late 1980s should be more cause for alarm.

Where the film does shine in the performances, where the likes of Brie Larson and Tim Blake Nelson launch themselves so deep into their roles they’re almost recognizable. But it’s Rob Morgan who really steals the show as death row inmate Herbert Richardson, a veteran with PTSD who committed a murder while losing his mind. He perfectly portrayed a character who had mental problems that did not receive help and as a result, believed he deserved the chair. There’s a great story within him about healthcare in tandem with the criminal justice system but another time perhaps.

Just Mercy makes itself clear enough to be a more hopeful courtroom drama rather than one that wants to crash into the corrupt system head first. Armed with a gospel soundtrack and Oscar bait monologues, it’s suitable enough for some audiences to grasp and think about as they nod preachingly. Stick around after the credits, however, for an extended text epilogue that showcases not how far we’ve come but how many more problems we have yet to resolve.