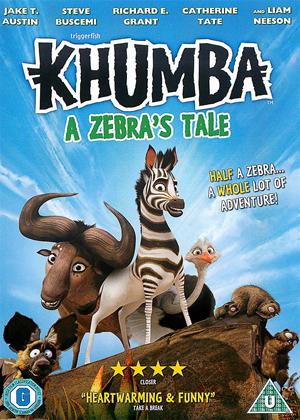 Reviews (1) of Khumba: A Zebra's Tale

first time ive seen this film and have to say its defently a must see has a nice story to it and some upsetting scenes at end love the southafrican music :)

A fish (although in this case it’s a zebra) out of water story Khumba: a Zebra’s Tale is the story of half striped Khumba a zebra living in the Karoo region of South Africa whose herd suffers during a drought and blames their misfortune on the unusual physical appearance of the young zebra. Told of a mystical watering hole by a mute grasshopper Khumba embarks on a journey across the desert in search of the magical water that will complete his stripy complexion and normalize him to the rest of the herd, but like most children’s journey stories, Khumba learns more than he set out to.

A rather unusual production Khumba has all the star quality of a big Dreamworks production, thanks largely to the voice talents of Hollywood stars such as Steve Buscemi, Laurence Fishburne and Disney’s Wizards of Waverly Place Jake T. Austin, but without the fanfare and huge cinematic release. In fact, as an adult who still loves kids’ films, I hadn’t even heard of Khumba until the DVD turned up on my doorstep. Despite this the film has the same appeal and quality of some of this years’ more high profile features, an entertaining script and wonderful visuals, it just goes to show that it doesn’t have to be a Disney film to be good family fun.

Don’t get me wrong, this isn’t some small fry indie feature, as the casting will tell you Khumba still boasts a pretty big budget, it’s just nice to have something that’s a little different from the usual things offered by the big American studios. Presenting this part of the African desert on animated film for the first time Khumba comes from the same people that brought us Zambezia (2012) and has the same charm and entertainment as well as again offering a slightly less Americanized children’s narrative.

With a story that will entertain kids and characters that will charm adults, as well as adorable visuals and expert animation Khumba: a Zebra’s Tale deserves more notice than it has received thus far and I highly recommend both it and its sister film to anyone looking to show something different to their kids this autumn.