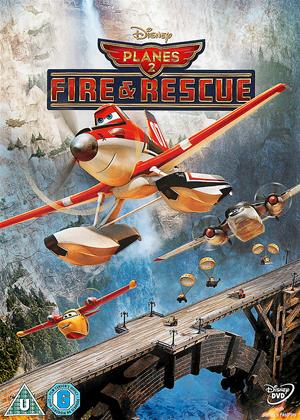 Reviews (2) of Planes: Fire and Rescue

This film is ok but it is the same old story with Cars, Cars2, Planes, and now this which is like a follow up from Planes . It is getting more of the same with all these, the kids will still love it.

So, it turns out that Disney are not quite done with this franchise. This is a spin-off to Disney’s Cars series, and a sequel to Planes, released in 2013. I know this is not targeted towards my demographic - early 20s - but I am really getting sick and tired of these computer-animated kids films that are the same thing over and over again. They might entertain the little kids, but they are a far-cry from the old Disney films that entertained numerous generations and are still enjoyable today.

What began with Dusty Crophopper learning to overcome his fear and racing around the world, is now the famous air racer joining a team of aerial firefighters. Together, they battle massive wildfires and learn about themselves, and what a real hero looks like.

It takes a special actor to bring a character to life with only their voices. They cannot convey anything through body movements or facial expressions, making it a job for a talented selection. Though the children in the audience will not be able to pick-out the names of the actors voicing their loveable onscreen characters, the adults will find a large number of them recognisable. The cast list includes Dane Cook, Ed Harris, Julie Bowen, Brad Garrett, and Teri Hatcher.

For films to be truly successful, they need to be relatable to kids, parents, and grandparents. If it can do that, it has a better chance at having longevity. Planes: Fire and Rescue had a couple of instances that seemed to be targeted to the adults in the audience. These were mostly comedic one-liners, but might not be enough to compensate for them being dragged along by their kids.

The film’s story is quite general and not complex, though some of the fire scenes and topic might be a bit intense for the younger children watching.

Especially with some recent animated children’s films, it feels more like a marketing opportunity than a film with meaning. It has been pointed out that Planes: Fire and Rescue has a theme reminiscent of ‘the little engine that could’ and perseverance, but it feels kind of flat. As per usual, the shops will be releasing a plethora of toys, bed sheets, and everything else imaginable. They have already announced a video game based on the film to be released on a number of consoles.

The response from critics and audiences have been mixed. The majority of the reviews agree the little kids will fall in love with the characters and be dazzled by the animation, but also that it is not a film for anyone else.

If you have to take the kids to the cinemas, Planes: Fire and Rescue will keep them entertained, and you can be sure they are not being subjected to coarse language and inappropriate themes.

Overall, not the best film, but not the worst, either.