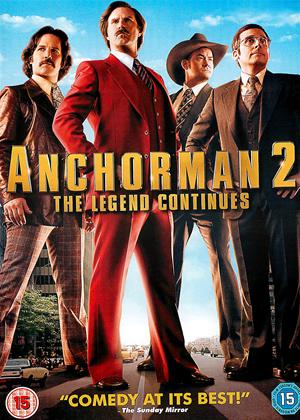 Reviews (1) of Anchorman 2: The Legend Continues

better than original - but should be funnier with the cast - Anchorman 2: The Legend Continues review by vd

Most of the good stuff is in the trailer and passes the 6 laugh test. However nagging thought is that with this cast, the film should be better. Best scene is probably in the last 15 minutes with the showdown

Ron Burgundy is back with the News Team for another adventure in the realm of faux news reporting and while the film sticks to the formula of the first cult classic it somehow manages to make the real gem of this special world seem less impressive as Burgundy himself becomes a thoroughly unlikable, irritating and downright mean person while giving us little to root for or find interesting.

The Legend Continues follows Ron (Will Ferrell) as he is transported to a whole new world of broadcasting on the national level. When he is unceremoniously fired from his position next to his wife Veronica (Christina Applegate), Ron rebounds with a job working for the first 24 hour news network but to craft his new show he needs his old compatriots, Brick (Steve Carell), Champ (David Koechner) and Brian (Paul Rudd).

Filled with the same unpredictable improv that made Anchorman such a success, Anchorman 2 lacks the originality that made its predecessor work as even Ron’s exclamations of shock degenerate into a mixture of unexpected words as Ferrell spews out lines like ‘Sweet Tony Danza’s Scrotum’ to little fanfare this time around. The surprise and thrill of Ferrell and his ability to find comedy doing anything is buried beneath a script so loose and flimsy that the film story feels like it could be told in half the time.

Cameos by actors like Harrison Ford, Greg Kinnear and Dylan Baker doesn’t improve much of the films shoddy design as the film flounders for almost its entire second act in badly thought out race jokes, uncomfortable sexual innuendo and lacklustre plotting. In fact the only real highlights are Carell who hasn’t missed a beat as Brick, the perpetually confused weatherman, and Rudd whose Brian Fantana has somehow become the moral core of the News Team.

The rest is unfortunately a poor imitation of the first film, with director Adam McKay playing the same cards expecting the same return and while trying to keep audiences happy with more of the same is a respectable idea, its a terrible way to plan a film, and it shows