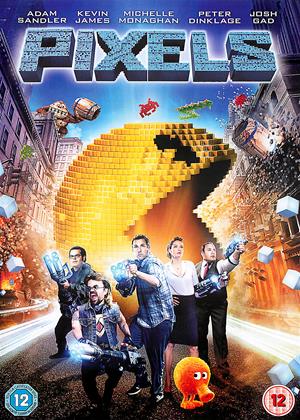 Watch it for the graphics. - Pixels review by MR

This so should have been a pretty high budget classic game-themed movie (they licensed so many real game characters for this it's amazing) but oh well, it's yet another Adam Sandler film just like all the others. Even if you like him, this is not one of his best. If you don't, it's pretty painful.

So, the acting and dialogue was pretty poor on the whole, the story was merely ok and the graphics are pretty. Would warrant a three stars but Adam Sandler's lead touch drags it down further.

This film feels like a nostalgia piece produced for the sole purpose of giving middle-aged Hollywood execs a chance to reminisce about the arcade games they enjoyed playing in the 80s. The plot is so painfully contrived it's ridiculous, and every character is an unlikable jerk. If you want to see a good film about video game characters, give this one a miss and watch Wreck-It Ralph instead.

The premise - I like. The film itself - so very disappointing. There was virtually no re-enactment of the gaming scenarios that everyone played when they were younger - the 'taking out' of the invaders was done by a 'light cannon' which eradicated everything it needed to but the fun, enjoyment and graphics that one remembers from Space Invaders, Asteroids etc is completely missing from this. A strong dose of humour would have made this better but even that was missing.

I enjoyed this film, its one of those films that you just need to switch your brain off a bit and just enjoy it for what it is, a simple comedy adventure where aliens send to earth armies of old video game badies , like Pacman and others.

The title of Pixels is inaccurate as the video game creatures present in the movie are assembled with voxels. That would seem like a complaint that only a nerd would make, but who exactly does this film think it’s targeting? Video games are no longer some underground geek culture that can be so easily scoffed at for entertainment with menial knowledge. It is a billion dollar industry with an ever-growing following of consumers and developers. It has become a part of the mainstream. But in the small world of Adam Sandler and his Happy Madison production company, video games are just a simple distraction for young dorks and eternal virgins. That’s the way it was for these aging actors in the 1980’s and that’s the way it’s always going to be. From that mindset, this movie really displays both its age and obliviousness to its subject matter and writing.

The premise starts solid enough with aliens invading Earth based on images of video games that were sent out into space. It’s been done well as a simple segment for the animated sitcom Futurama, but can still be viable as a satirical action picture. The problem is that none of the mechanics for this setup is ever given much logic or reason. Why do the aliens choose specific video game forms? Why do they adhere strictly to the gameplay mechanics of how they are defeated? Why does Q-Bert become their ally? Why is the only female video game character an actual human rather than an assortment of voxels? None of this is explained. None of this matters. All that matters is that video game characters are present on screen for our characters to battle. They don’t try to say or do anything unique, cool or funny. It’s all just played up for nostalgia. Remember Pac Man? Pac Man is in the movie. That’s funny enough, right? No? How about Donkey Kong? Centipede? Galaga? Joust? The movie just keeps making references until you find it funny - even going so far as to dig up old 80's icons as Madonna and Max Headroom.

Even from an alien invasion angle, Pixels screws this up royally by offering no build up to the invasion. The aliens just appear amid all the bland characters developed. Adam Sandler acts as the aged and sarcastic nerd who was once a video game champion. Now he works as a nerd repairman for video game systems, not finding it the least bit unprofessional to come on to his clients while drinking with them. He doesn’t seem like that much of a nerd so the movie felt the need to add in the poor hygene stereotype of him not brushing his teeth. For some reason Sandler is chosen to be the strategist for defeating the aliens. For some reason Peter Dinklage has to be broken out of prison to help as the Donkey Kong champion (though he never defeats the character in the movie). For some reason Kevin James is the president. The only character that makes a slight amount of sense being present is Josh Gad as the conspiracy theorist. That’s not to say he’s likable either - spending most of the movie screaming in terror with his screeching voice.

Nothing in this film makes sense. The military needs the video game experts because they’re dealing with video game aliens, but why? We never see how ineffective the military is against the creatures. No missiles are fired, no jets scrambled, no guns fired. The only thing that can stop the aliens are light particles, but they can apparently only be fired on the ground by inept soldiers that can’t read patterns. I know the movie is just struggling to find a reasonable means for Sandler and crew to fight video game characters, but could it at least try to pretend like there is a plot to all this?

But for all the talk of the video game “experts”, they get so much wrong to an irritating degree. One of the characters is revealed as a fraud video game champion for using cheat codes with Pac Man and Donkey Kong. The only problem with that is THERE ARE NO CHEAT CODES FOR PAC MAN AND DONKEY KONG! And even if there were, it makes zero sense how they’d be able to use those in the context of these real-life games. One character zips though the streets quicker than normal because of a cheat code. What the code is, how it's used and what it does exactly is never even slightly addressed. This is not the 1980’s anymore. You can’t get away with clueless movies like The Wizard and expect nobody to call you out on how little you know about your subject.

Even if you have little to no knowledge of the referenced video games present, Pixels is a jumbled mess of a movie without a shred of cleverness or cohesiveness. Director Chris Columbus at least delivers some capable visuals by filling the backgrounds with plenty of voxel characters, but he’s working with a script that allows for little creativity in the foreground. It’s a major waste of all the licensed material for the picture which pales in comparison to the more competent Wreck-It Ralph. There’s a line in Pixels where the President tells the military to let the nerds take over. Someone should have told this to the writers given how they have no clue what they’re talking about, how to tell a joke or how to build a character. Video game nerds are going to rage over how much this film gets terribly wrong and for once they won’t be alone in their frustrations over a movie missing the details.