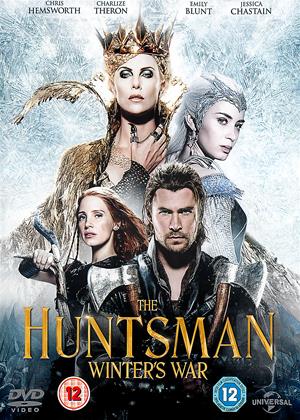 Reviews (3) of The Huntsman: Winter's War

Emily gets Frozen - The Huntsman: Winter's War review by NC

Not so much children's films now. More like Marvel meets Cinderella. All good fun, and gives the computer graphics boys a living.

Thought at the start it was Amanda Blake from Sky News USA instead of Emily Blunt!

A Snow White film with no Snow White! - The Huntsman: Winter's War review by CS

What was the point of this movie? This starts off as a prequel, then starts to take a parallel course to the first film, then quickly becomes a sequel, confused! The script is dire and there is a really annoying narrators voice which keeps popping in and out to try and explain what's going on, as the storyline is so convoluted as to make practically no sense at all, it's all over the place! Direction is poor, the special effects are dire and the acting is non existent! I had to watch this film in two parts as I found it so boring, not a patch on the first film and really apart from milking it for the money, what was the point!?

Entertaining but Slow to get going. - The Huntsman: Winter's War review by porky

Ok, we know the Main story of Snow White and the Wicked Step Mother/Witch bla bla bla....well ,that is a far Better story than you have here .

This one takes FOREVER to make any sense. a Good but Deeply Upset/Hurt Woman becomes Bitter and Twisted and Cold Hearted. yeh yeh ....yawn , whatever .....Nothing really much happens untill Charlize Theron and her slightly more interesting Wicked Ways ad Fabulous frocks turns up again ,pretty much in the Last Quater of the movie sadly.....so you've a Long Wait for anything interesting to arrive. Till then its pretty Dull .Sad ,Cold Hearted Snow Queen moaning a lot about other people falling in love Boo Hoo ....she has Outlawed Love by the way ..... yeh ,whatever . when has that ever stopped Horny Young People getting together ?...Seriously ?

The Huntsman: Winter's War (aka Snow White and the Huntsman 2) review by Mark McPherson - Cinema Paradiso

Is Huntsman: Winter’s War a prequel or a sequel to Snow White and the Huntsman? Is it more about the Huntsman or the evil Queen? Is it a dark battle of witches or a fantasy of adventure with lost loves? These are questions that floated through my head as I watched the movie. I mentally asked them not out of curiosity or interest, but to keep myself awake during this passive picture.

Did there really need to be a solo movie for Huntsman Eric (reprised by Chris Hemsworth)? There isn’t anything all the interesting or compelling about his backstory and post-Snow White tale. In fact, if you’re familiar with the likes of Universal Soldier or any picture about a soldier bred for war since childhood, you can most likely piece his story together on your own. The evil Queen Freya (Emily Blunt), endowed with the magical powers of ice, has taken in scores of children to be bred for war and free of all love. She teaches them that love is a foolish thing and that they should instead concentrate on combat training. But, of course, Eric ends up falling for love anyway. When he falls for the recruit Sara (Jessica Chastain), Freya literally comes between them and stages their deaths to prove that love is stupid.

Several years later, after the events Snow White and the Huntsman, freelance warrior Eric is tasked with retrieving the lost Mirror Mirror. He’s given two of Snow White’s dwarfs as allies in his quest. Prior to watching this movie, I watched an episode of Animaniacs that parodied Snow White with only two dwarfs and the narrator pointing out how cheap this production is. The same thoughts ran through my head throughout from the moment the dwarfs come on screen. This is a fairytale world that felt far too cheap and underdeveloped. There’s a moment where Eric and dwarfs are travelling down a river of fairies that soar around more like the effect of a screensaver than fantasy creatures. The most the movie has to offer with grand special effects is the revival of Queen Ravenna (reprised by Charlize Theron) merging with Mirror Mirror. Her new powers, which don’t seem to have any rhyme or reason, allow her to turn metallic and use pointed tentacles to stab people as if she were an octopus.

For a fantasy picture that features some mythical creatures, a handful of fight scenes and evil witches that battle each other, I found myself incredibly bored with the picture. None of these characters did anything for me in how passive they appear. There isn’t much of anything to the relationship of Eric and Sara which has very little chemistry from the beginning and even less so when they’re reunited in the second. The feud between Freya and Ravenna could have been a unique magical battle of witches, but the two never seem to clash as much as they should. Not a single character breaks out of their predictable roles, punching in all the expected numbers without much surprise. The two dwarfs have love interests, but they don’t have so much chemistry as much a string of humorless gags. When the comic relief fails as backup to the drama that is far too low key for this fantasy, the major flaws of the movie become much more apparent.

Everything about Huntsman: Winter’s War just screams of quick cash-grab on the last leg of the dark fairytale genre. You can feel how hard it’s trying to bank off the success of Frozen and how the filmmakers struggle to make a Snow White movie work without Snow White. Kristen Stewart did not return to this picture as Snow White and it’s easy enough to see why: not all side characters need their own movie. There is no prince to come along and awaken this movie from its deep sleep.