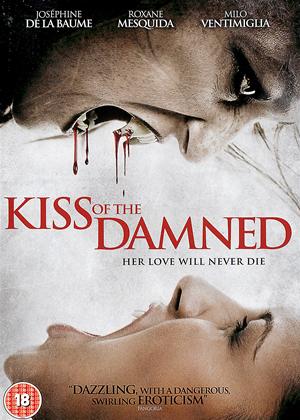 Reviews (1) of Kiss of the Damned

Spoilers ... - Kiss of the Damned review by NP

The vampires are beautiful but wary of harming humankind, instead choosing to feast on wild deer and the like. When they do bite another of their kind, it is usually to the sound of opera and surrounded by sumptuous décor – and often because of the machinations of wild-child Mimi, who comes to visit her sister Djuna and her new lover, Paolo. While Paolo’s relationship with Djuna goes from furtive glances in a video store to a passionately established couple-dom within the space of a few short scenes, the pace is otherwise leisurely, and there is much chance to drink in the glamour of their vampire society before Mimi crashes the party and seduces and bites as many people as she possibly can.

Inevitably, she seduces Paolo, which is dealt with in an understanding, mature way by Djuna. Mimi’s eventual undoing occurs with no intervention from her sister. She swerves her car to avoid hitting a deer – an act of kindness, ironically - the kind of livestock that sustains her sister’s appetite.

With such beautiful production values, it’s tempting to think the plot would be more profound than it is. However, the simplicity of the telling allows us to drink in the haunting landscapes, architecture and incidental score without much interruption. My only slight problem is how quickly Djuna and Paolo settle into cosy domesticity in order to underline, and contrast with Mimi’s debauchery.