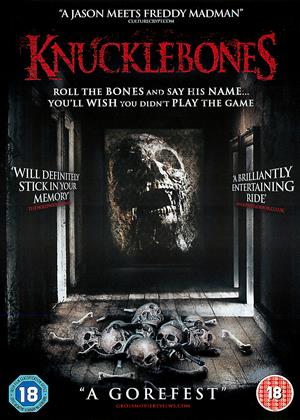 Knucklebones is a fairly competent effort at a horror film that, unfortunately, falls flat on its face in regards to the story, execution, and everything that involves some kind of coherence of narration and plot. The story goes something like this: the perennial bad guys the Nazis make some kind of a demon (don’t ask) that practitioners can summon by rolling some knucklebones and proclaim an incantation for the sole purpose of wiping out an enemy army clean. This demonic apparition is some kind of a mish-mash between the most famous movie killers in recent times, including Jason Voorhes and Freddy Krueger, but with a quirky sense of humor that ends up being more cringe-worthy than funny (good humorous writing is a hard thing, I’ll admit that much). Anyways, the story.

For those following these rants, you’d know that I operate with three main variables in order to determine the objective axiological constant of a given film, i.e. the film’s value. These three variables are: competence, creativity in telling a story, and the story itself. Knucklebones is half-competent and gets a pass at the first variable, but fails to check the boxes of the latter two. See, the part where the demon is summoned through a living, breathing person is creative but leads nowhere, which defeats the purpose of this rule being included in the film. In fact, the filmmakers could’ve used this rule to drive the story further into unexplored territories, but we don’t get anything near that and we’re instead served with some painful dialogue, cheesy one liners, and a distorted audio which serves as the voice of Knucklebones. Some advice for next time: if you’re on a tight budget and have some creative ideas brewing in the pipeline, try to either go for a slasher premise or do a psychological horror instead. The two of them just mesh very well together when and if you don’t have the proper means.

Next, the acting. Most of Knucklebones’ premise rests on the damsel-in-distress film trope, but instead of damsels the film opts for some hot and promiscuous teenage girls with an overt accent to their cleavages and thongs. Which puts Knucklehead, sorry: Knucklebones into ‘parody territory’ and takes the majority of seriousness out of the film altogether. Granted, if this is where the filmmakers were going with this one, then they’ve failed to make it funny enough. If not, then the film just doesn’t have that good of a story to disregard the unintentional ‘so-bad-it’s-good’ moments. Either way, it’s a gore fest without enough gore and a horror flick without enough terror to define it as either one of those genres respectively.

Finally, is Knucklebones ready to be watched by you? Well not if you ask me.