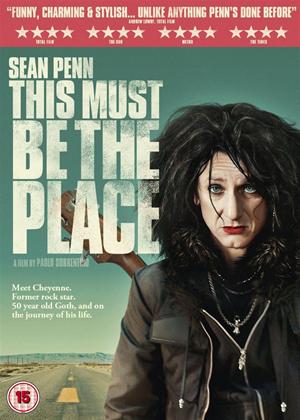 Rent other films like This Must Be the Place

Reviews (2) of This Must Be the Place

Misguided, misconceived, overlong, self-indulgent, flabby mess of a movie - This Must Be the Place review by PV

This film gets 1.5 stars from me - and it would be lower were it not from the nice Utah scenery and the good performances by supporting actors (rounded up to 2 stars for that).

This film feels VERY long. That is because of a terrible performance by the ever-irritating Sean Penn pretending to be an aging goth pop star, but only partly. This also feels yawn-inducingly long because the script is a mess, there are too many insignificant characters (in the Irish scenes) who are just clutter and flab that should have been cut in the script edit, and generally it is amateur in its self-indulgence, like a vanity project.

What is very weird about this movie is that it's like 2 films in one: the first about an aging rock star in Ireland - which then morphs into the hunt for an auschwitz guard in the USA.

The simple fact is: this just does not work. It might have worked if one or the other. But as it is, it is shockingly bad - and Sean Penn deserves to be tied up and have his oscar melted in front of him for this atrocity of a lead performance. David Byrne also derves a slap for his silly cameo.

Far better to rent out Killing Bono or That'll be The Day - both great movies about the music business (the former in Ireland).

Then watch The Boys from Brazil or The Music Box - both superb films about hunting down nazi war criminals.

Watch this only to learn how not to make a good film.

A watchable misfire - This Must Be the Place review by TE

Worth watching if you can get past the off-putting central character played by Sean Penn. 'Cheyenne' is a late-middle aged pop star, modelled on Marilyn Manson. He is a parody of a faded, blank-faced, whiny-voiced, reclusive celebrity.

The first half of the film is set in Ireland, whilst the second half is set in America (mainly Utah). The American half is much better than the messy, sketchy first half. This is perhaps because Cheyenne goes on a quest to find the Nazi concentration camp guard who tortured his father, a storyline that gives the whole thing some much needed coherence.

No Sorrentino film is without its visual splendours, and there are many memorable scenes and one-off images that stay in the mind. The choice of music is also inventive and interesting. There are also some very good cameo roles, especially Frances McDormand and Kerry Condon.

However, it remains a frustrating hotch-potch of a movie that is too heavily flavoured by Cheyenne's quirks and tics.

This Must Be the Place review by Alyse Garner - Cinema Paradiso

Taking its title from the song a sweet but rather self indulgent scene in which a chubby little boy sings in a diner in New Mexico This Must Be the Place is a long and rather bizarre character study of an ex-goth-rock star, Cheyenne (Sean Penn) as he travels through his deceased father’s past.

The heavily made up, block toe nailed millionaire has been living a happy but quiet life with his surprisingly normal and down to earth wife Jane (Frances McDormand) in a mansion in Dublin when he receives word that his estranged Jewish father is on death’s door. A fear of flying forces Cheyenne to take the boat back to America, where he arrives in New York just in time for the funeral. Seeking to further understand his father, who was left scarred and distant after the abuse he underwent in Acquits, Cheyenne travels across America in search of the Nazi war criminal responsible for his father’s pain.

Although there are lots of interesting elements to This Must Be the Place, ultimately it is a rather self indulgent movie, filled with long lingering close ups of the eyes and mouth which are clearly meant to encourage you to feel more connected with an ultimately artificial character.

Penn is good, as you would expect him to be, but as with some of his previous roles, including that of the Autistic father in 2001’s I Am Sam he takes things a little too far and rather than presenting an unusual character with depth he comes across as an accomplished actor playing a well researched and rather over the top role. Combine these over zealous elements with the incredibly slow pacing of director Paolo Sorrentino and This Must Be the Place ends up feeling more like a long hot car journey in the desert heat with nothing but 80’s radio to keep you company.