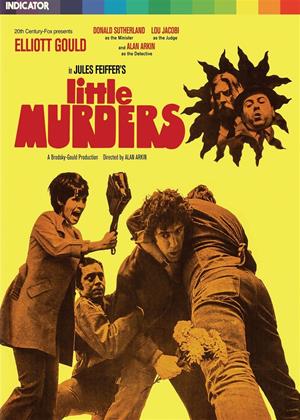 There are many films set in a dystopian future and although Little Murders is not supposed to be science fiction what the film has to say about society is pretty compelling. This is my understanding:

• Alfred Chamberlain was happy went he felt nothing. The minute he decided to open up society (literally) shot him down and he was forced to become numb.

• Being celebrated in the media for taking photos of shit is pretty self-explanatory.

• Donald Sutherland's Rev Dupas understands that the institution of marriage is a facade and is an institution done out of habit than necessity, but also knows he is powerless to do anything about it, so resigns himself to saying "everything is fine" in the process of getting beaten up.

• The unawareness of Alfred's upbringing and his emotional state by his parents while being wholly aware of philosophy and books (which brings them greater happiness) is a criticism of the bourgois failure to connect and to try to explain away problems with thinking.

• The fact that the Alfred, Carol and Kenny became delightfully happy when they gave in to the craziness instead of trying to make sense of it says a lot about finding identity and being part of a tribe even though they know it is amoral.

• The heavy breather who turned out to be a quite a nice guy is just a great example of the duplicity in all of us.

• The train ride when everyone ignores victims or pretend its not happening is a testament to looking the other way because its not worth getting involved. The genuis bit when Alfred himself ignored another victim on the stairs and did not help him spoke volumes.

All of this from a first viewing. The first half was a bit of a slog as the world building needed time. It needed 20 minutes chopped off - maybe the scene with Judge Stern could be axed.

It is actually quite a clever film and has a lot to say.