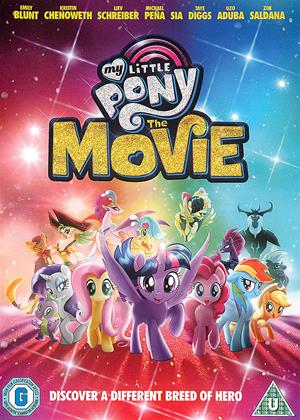 Rent other films like My Little Pony: The Movie

Reviews of My Little Pony: The Movie

It’s rare that I feel like the odd man out at a screening, especially for an animated kids movies. I’m used to the crowd of kids going nuts and parents trying to calm them down, but there was a different crowd at My Little Pony: The Movie. There were men in their twenties, donning more Pony apparel than the kids, eagerly awaiting the theatrical outing of Hasbro’s most iconic animated property. Yes, I was aware of the collective of adult fans dubbed Bronies, for all their weirdness and rationalization about how the animated series is a stellar show. I have even watched a few season and could see the appeal in its writing and direction (I have a kid, what’s your excuse). And while I still don’t find myself joining them in their celebration of the property, I can at least see more of a reason why the show is so revered with this film.

The story is nothing major, adhering to a somewhat standard template for bringing an animated series to the big screen. The pony kingdom of Equestria is gearing up for a big party, and Princess Twilight Sparkle fears she won’t be able to finish all the arrangements in time. Thankfully, she has her pony friends to help as the film reintroduces us to the familiar ring of primary ponies. Rarity’s fashion skill help with decorations, Rainbow Dash’s speed helps keep things moving, Applejack’s dedication to the fruit of her name provides the refreshments, Pinky Pie’s party nature makes her best equipped for getting a party started and Fluttershy’s quiet quality...um, is present.

Everything is just about ready for the film’s musical guest Sia, presented aptly in pony form when an evil force invades the kingdom. The dastardly Storm King (Liev Schreiber) sends his airships to turn the bright and colorful world of ponies into a dark land of enslavement. The forces are led by Tempest Shadow (Emily Blunt), a unicorn with a damaged horn, seeking revenge on her kind that wronged her long ago. Long story short, Twilight Sparkle’s collective of friends escape and have to find some reinforcements to battle the bad guys.

On their adventures, they meet a host of delightful characters. The sneaky cat Capper (Taye Diggs) wants to help them, but only if there’s a little something in it for him. The pirate Captain Celaeno (Zoe Saldana) works as a delivery service for the Storm King but is eager to take to the skies in her airship as a treasure hunting captain once more. Princess Skystar (Kristin Chenoweth) is a perky seapony that wants to offer help, but her mother claims it’s too dangerous for her kingdom to get involved. A few follow the ponies as they wage a not-so-violent war for freeing Equestria.

The best part of the film is the animation. The animated series featured budgeted Flash animation the relied mostly on tweening of objects, but the theatrical presentation presents a surprising amount of fully-animated characters. It’s not entirely on the level of the more robust and detailed traditional animated film from the days of golden age Disney, but it’s surprising how stylish the results are for the animation team pushing the software to its limits with expression. Many of the backgrounds are gorgeous, and the lighting is improved to stress the grandness of a My Little Pony movie really.

I had fun watching the film, but it was mostly passive fun. There’s plenty of musical numbers, including a sequence of mermaid ponies that I’m sure many little girls will go nuts for. While most of the songs are pleasing to the ears, none of them are particularly memorable. I enjoyed the additional characters to the Pony world, but more in the little vignettes than anything significant they brought to the story, especially the Storm King that feels more like a goofy side character than a real threat. There’s just enough here to keep the kids entertained with the colorful imagery, the parents content with the morals included and the Bronies satiated with everything else. At the very least, it’s far from the lesser attempts of Hasbro’s 1980s era where their cartoons were about selling toys than anything else. Toys remain, but now there’s at least some pleasing animation to go along with it.