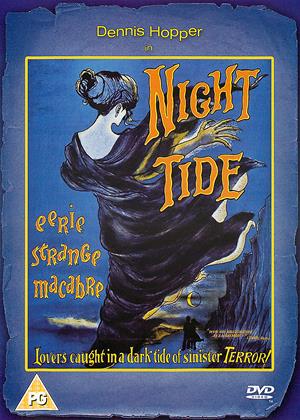 Z budgeted, dreamlike and very cultish fantasy, shot along the California coast, and evocatively set in an empty amusement park. It is a film that draws strongly on a maritime atmosphere. It is very slow with a bare, prosaic script, but it has that strange, ethereal mood that amateur productions sometimes have because they are made in unconventional ways.

There's a cast of mostly tv support actors, but Dennis Hopper leads as Johnny, a sailor in the US navy who falls in love with Mona (Linda Lawson), who works posing as a mermaid in the fair. She is being investigated by the police as two of her boyfriends have been found dead.

The old sailor who runs the mermaid attraction (Gavin Muir) tells Johnny that Mona is a siren from the sea who draws men to their death... The fortune teller thinks the sailor is in deep peril. So who is crazy? Maybe it's even Johnny who keeps having nightmares about the sea.

This is an atmospheric, homemade film which demonstrates what can be done with very little money but plenty of imagination. The eerie music is effective, particularly the echoey flute themes. The lack of budget for extras makes this a deserted, lonely world, with a melancholy ambience that lingers.