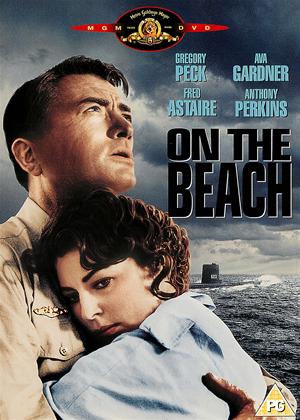 Reviews (2) of On the Beach

This is the way the world ends, not with a bang but a whimper - On the Beach review by RP

Based on the Nevil Shute novel of the same name, the film tells the story of the last days of the world as seen through the eyes of 5 people. This is not a crash bang lots-of-effects story, but gentle and romantic, and all the more effective for that.

The book was published in 1957 (and the film is set in then-future 1964) and supposes that there has been a nuclear war (started by accident) in the northern hemisphere. The radiation gradually moves south killing all in its path; the film is set in Melbourne, Australia, the last major city left. A US nuclear submarine is all that's left of the US Navy and undertakes a final voyage to determine whether radiation in the far north is now falling (it isn't) and the source of mysterious radio signals (accidental and random).

With hope for the future extinguished, the characters live out their last days before radiation sickness gets them. That makes the film sound a great deal more gloomy than it is – it is certainly sobering and thought provoking, but it's filled with life if not laughter.

However, there are some points which grate on me, not least the fact that the stars are all American with no Aussie accents to be heard. The film while reasonably true to the novel deviates unnecessarily in small but irritating ways – for example, the name of the submarine is changed from Scorpion to Sawfish, the source of the radio signals is changed from Seattle to San Diego, in the novel the captain remains faithful to the memory of his wife etc etc. But then I'm a Nevil Shute fan :)

Just in case you wonder why the end of the world is so subdued, the book includes an extract from T.S. Eliot's poem 'The Hollow Men', including the final lines 'This is the way the world ends, not with a bang but a whimper'. The film is set in a world now long gone, the cold war period over, but is still a sobering reminder of what might be. 4/5 stars.

I really enjoyed this film.

Whilst Russell Mulcahy’s made-for-TV remake (2000) is a good film that is well worth watching, this 1959 original works better (which is not entirely surprising given the exceptional casting).

If you enjoy romance in the context of nuclear war, then also check out Steve De Jarnatt’s ‘Miracle Mile’ (1988); it is not available on CP, but you buy a US import for a couple of quid on eBay.