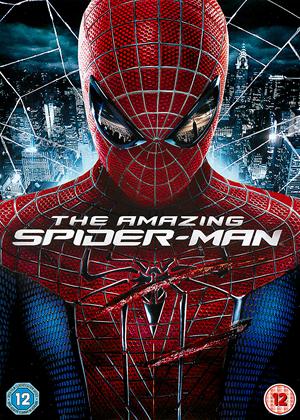 Reviews (5) of The Amazing Spider-Man

I really disliked this film. It starts OK - some nice scenes of Peter Parker discovering his powers - but after that? Oh dear. Just another CGI computer game for hyperactive teenage boys - and when the lizard man appeared and started talking, I really saw a 'jump the shark' moment.

It's a shame really, because there are some good lines in the script.

But I think the actor who plays spiderman is not a patch on Tobey Macguire.

Watch through the credits to see a little snippet shamelessly setting up a sequeal - which I truly hope is never made.

And - typically - a Brit actor and accent signifies a villain. Racism, really, and lazy cliche.

This first half of this movie gets 3 stars' the second half less than 1. So 2 stars average.

Well, over the last few days I've seen three of 2012's comic-based superhero 'blockbuster' movies: 'Avengers Assemble', 'The Amazing Spider-Man' and 'The Dark Knight Rises'. And - from low to high - that's my order of preference.

The problem with this film is that's it's yet another remake - and by definition, that makes it not very original. I couldn't help but make continuous comparisons with the 2002 version directed by Sam Raimi with Tobey Maguire as Peter Parker / Spider-Man.

The 2012 version is directed by Marc Webb with Andrew Garfield in the lead role - and frankly, he's just not nerdy enough for his transformation into Spider-Man to be very interesting. Given that there's 10 years difference between the two films you'd expect the effects to be better. They are - I think - or at least they're bigger, but also more annoying. In fact I found the whole film to be annoying, from the silly too-good-looking, badly acted girlfriend to events like a procession of tower cranes helping Spider-Man swing across town.

Nope, I didn't like it much and at 2 hours 10 minutes it's far, far too long. I know it's taken lots of money at the box office, but I can only give it 2/5. It is slightly better than the poor 'Avengers Assemble' but it doesn't deserve any higher rating from me :(

I would rather watch Spider-Man again than see the sequel to this movie.

It is difficult not to compare this with Spider-Man. Making this movie was a risk and sadly Marc Web has failed to produce anything equal let alone better. It is a shame because I thought 500 days of Summer was well-made and very watchable. Marc Web should perhaps go back and make similar movies and leave the scene of superheroes for other directors.

This is only the second film I've seen on my new Panasonic home cinema system but a superb sound track put it through it paces and tested all six speakers. As far as the film is concerned obviously the CGI makes it a visual treat but the Spiderman genesis story has been revisted many times so you know what to expect. Solid if unspectacular performances from the cast but nothing standout. That said, it was a fairly entertaining two hours viewing and is worth seeing if you have a couple of spare hours, although I agree with other reviews in that it is slightly overlong.

A poor effort - The Amazing Spider-Man review by Alain

There are some serious issues with the script of this film. So much so that it hinders the progression of the plot. For a while I thought there were two different characters played by the same actress (Emma Stone). How could Gwen Stacy be both a 19 year old high school student, and a scientist and tour guide at Oscorp at the same time? Very confusing.

(Spoiler alert) There is no real tension in the plot, the lizard looks scary enough but fails to impress. He is defeated by an antidote prepared by the same high school student after Spider-man asks her if she can run a serum sequence or something to that effect. All she does is put some green solution into a machine, tap on a screen a few times and out pops the antidote...

I agree with some of the other reviews pointing out that the fist part of the film is OK and even enjoyable in places but the super-vilain part has been completely ruined.

This film had the chance of exploring the fate of Peter Parker's parents but failed to do so. It could have been its USP but instead it makes allusions that are left unresolved.