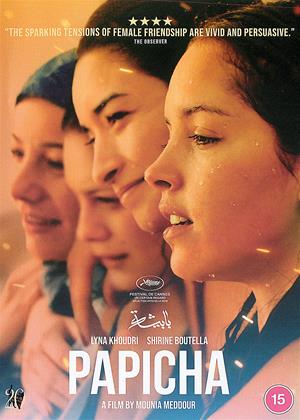 A not-too subtle anger runs through the feature debut of Algerian director Mounia Meddour, which centers around Nedjma, a student in an Algiers girls’ university hall of residence in the 1990s, who is determined to put on a fashion show as an act of defiance against the rising Islamist tide: female self-expression being denied both by enemies and so-called friends.

Lyna Khoudriv delivers a fine, fiery performance as Nedjma, and a clever strand is the inventive, pointed way in which clothes and textiles are used as metaphors both for female constraints and female defiance - the sight of Nedjma with pins sticking out of her mouth, transforming a ’haik’ (the traditional Maghrebi women’s robe) into a seductive ball dress, is a particularly telling image. There’s plenty of warmth and good humour alongside the darker notes, but what the film power lies mostly in revealing Nedjma's fury at the way a country she loves is being hijacked by bigots.

There's some rather awkward plot twists, and the last section is all a bit forced and melodramatic, but overall an intriguing, powerful piece of filmaking.