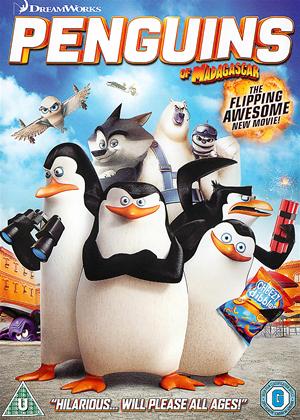 Reviews of Penguins of Madagascar

It was clear from the first Madagascar movie back in 2005 that the strongest, most appealing characters were the penguins. The secret agent style ramblings and antics of the four birds provided an endless wealth of comedic joy through their straight-faced tone. Not only have they been an essential inclusion in every Madagascar film, but they’ve also received a plethora of short films and even their own TV series. Finally, after years of being relegated to the side act on screen, the penguins of Madagascar have finally landed their own movie. And though this effort may not warrant a new spin-off franchise, the foursome at least have enough in them to pull off their first theatrical venture.

The characters of Skipper, Kowalski, Rico and Private are once again on trail of hot loot in highly guarded locations. They go to all the trouble of breaking into Fort Knox, bypassing the gold and heading straight for the last known vending machine of a particular cheese snack. But they are soon faced with a Bond-style madman in the form of a vindictive octopus named Dave (voiced by John Malkovich). Jealous at the attention the penguins received at the New York zoo, he dawns the human disguise of Doctor Octavius Brine. What he lacks in creativity for his name he makes up for with his maniacal revenge plot to destroy the public image of penguins.

But the four are not alone this time as they have some help from an animal secret agency, North Wind. Led by a wolf simply referred to as Agent Classified (voiced by Benedict Cumberbatch), they dedicate their technological know-how and fancy equipment to protecting animals that cannot protect themselves. Annoyed by the confliction between their parties, the North Wind decide to ditch the penguins after providing enough of the plot to them. A MacGuffin is introduced as well as a secret evil lair on a typical island setting for the penguins to infiltrate. These were most likely left over from some defeated Bond villain.

The plot is nothing all that unique, but it does provide a solid basis for the snappy physical comedy the penguins are best known for. In one of the most hilarious sequences, the rash leader Skipper ends up sending his men from the inside of a cargo plane to a freefall towards the Sahara. Mere miles from their own deaths, they try to think on their feet with what little they have to work with. One of them happens upon a box of parachutes, but that would be too boring of a convenience so they scrap the idea. They smack into another plane they could easily ride to safety, but change their minds when they discover it is headed for France (they’re apparently not big fans of their currency). They find a bounce house which is inflated just in time before they hit the sand. After a graceful landing, they’re still not made of stone that they don’t take a few minutes to enjoy their inflatable discovery.

The characters themselves have retained their charm with quick wit and maneuvers. They continue to walk the fine line between ignorance and intelligence with well-planned infiltrations meant for meager accomplishments. Their short stature allows them to dip and zip into any area like a pack of tuxedo-dressed ninjas. Even when they’re delivering straight-faced orders and dialogue, they’re still fun to watch like a well-oiled machine of action scenes. Giving a little more dimension to the four, the youngest dubbed Private is seen as the rookie with something to prove. He naturally gets his shot when the chips are down which results in a rather unconventional ending.

Penguins of Madagascar never compromises on its frenetic nature or irreverent brand of humor. Whereas the Madagascar films provided short bursts of the little deviants, Penguins just keeps firing with a plot and characters just as crazy as the iconic four. It’s also some of the most spot-on action movie satire I’ve seen in quite some time. For instance, how is it that whenever villains interrupt a television feed they make it seem so simple with clear picture and no audio problems? When Dave contacts the North Wind to mock them, he fiddles with the controls to get both the audio and visuals to display correctly. The North Wind try to talk him through getting his settings correct as I’m sure most people utilizing Skype have experienced at one point or another. I have to wonder if James Bond himself would bother directing his nemesis through the process in an almost certain classy tone.