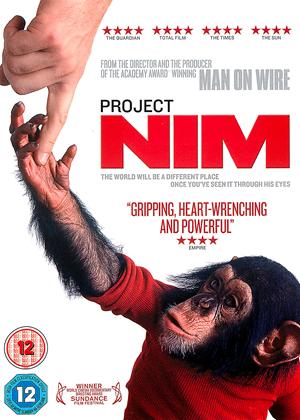 Synopsis:
From the Oscar-winning team behind Man On Wire comes the story of Nim, the chimpanzee who in the 1970s became the focus of a landmark experiment which aimed to show that an ape could learn to communicate with language if raised and nurtured like a human child. Following Nim's extraordinary journey through human society, and the enduring impact he makes on the people he meets along the way, the film is an unflinching and unsentimental biography of an animal we tried to make human. What we learn about his true nature - and indeed our own - is comic, revealing and profoundly unsettling.
Actors:
Nim Chimpsky, Stephanie LaFarge, Herbert Terrace, Wer LaFarge, Jenny Lee, Laura-Ann Petitto, Bill Tynan, Joyce Butler, Renne Falitz, Bob Ingersoll, Alyce Moore, James Mahoney, Henry Herrmann, Cleveland Amory, Marion Probst, Chris Byrne, Bern Cohen, Reagan Leonard, Anna May Marsh, Mike Lepera
Directors:
James Marsh
Writers:
Elizabeth Hess
Others:
James Marsh
Studio:
Icon
Genres:
British Films, Documentary
Countries:
UK
Awards:

Project Nim is an off-beat documentary about the life of chimpanzee Nim, a scientific experiment which involves raising the chimp amongst humans and teaching him to discover whether or not he is able to pick up language, speech and communication in the same way the human children do.

When the project originally begun in the early 70’s it raised much ethical controversy and was eventually deemed a failure when the leading psychologist asserted that the words and phrases Nim learned to sign were simply imitations of the movements of his trainers.

The film Project Nim dwells little on the project itself but rather plays out as a standard biopic, but with a surprising, intriguing and strangely embarrassing (for any humans watching at least) twist.

Nim begins his life living with a wealthy family who can only be described as “hippies”, where he is well loved and treated almost as a family member. However this endearing and romantic image of Nim’s life does not last long, as throughout the film he is shunted from one home to another, taught and tested rigorously until his own frustration and intelligence makes a stark and startling contrast to the blinkered and self indulgent behaviour of the humans around him.

Directed James Marsh, of award winning Man on Wire fame, the film uses old documentary footage, more recent film and talking heads interviews to demonstrate the way the human relationships around Nim disintegrate as the individual morals, ideals and desires of those involved in the experiment become apparent.

Taking the film from this angle gives the biopic a fresh and interesting take and leaves you feeling thoroughly impressed with the film making, totally captivated by the adorable Nim and utterly bemused by the idiosyncrasies of humanity.