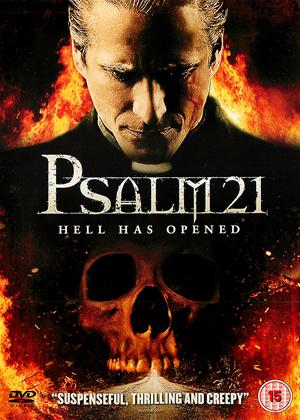 In Stockholm, Henrik (Jonas Malmsjö) is a popular priest whose good relationship with his congregation sadly doesn’t stretch into his home life, which is awkward to say the least. On hearing of his father’s death, he drives through the night – against the wishes of his girlfriend – to his father’s hometown. On the way, he knocks down a woman whose body then disappears.

He takes lodgings with a very strange family and sees a little girl in the barn outside. The girl transforms into a CGI demon and vanishes. Then he meets other people who transform into CGI demons, including a teenage girl who appears to seduce him in the barn before assuming the appearance of his mother (I think) before transforming into another CGI demon.

This continues for the film’s running time and it soon becomes an impenetrable tangle of intensely acted, beautifully directed set-pieces and flashbacks, most of which appear to be designed to force Henrik into believing in the existence in Hell – something he has always previously denied.

The repetition and occasional absurdity of the effects cease to have any real effect after a while, especially as such moments are never really explained. It actually becomes an annoyance that such talent is wasted here – why take the time to perfect these shots and effects if they are just lost in a story that continually makes no sense?

The ending sees Henrik conducting a sermon to a full congregation (including his son, with whom it seems relations have at last improved) denouncing religion and his faith as an elitist fiction. The implication is that he has lost his mind, and his faith in religion, but gained the acceptance of his wayward family. Very odd.