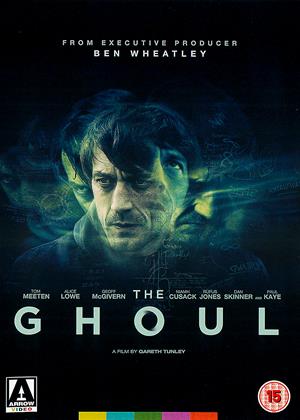 Reviews (9) of The Ghoul

nonsensical story and is so booooooorrrrrrring and slooooooow. With lots of poor quality acting. Not a film I would recommend at all. Couldn't watch more than 30 minutes before I have to shut it off.

It’s strange: I can go through a phase of watching horror films that actually debilitate because of their lack of originality. They tell the same variations of stories, featuring a gang of deeply unpleasant people being stalked by something horrible, or a house giving up its dark secrets to the latest happily married non-entities to have moved in. It sometimes makes me wonder why I love horror so much, when the limitations film-makers impose upon themselves result in such mediocrity.

And then, I can watch a run of utter gems. Often low budget, these are films with something original to say, or at least an original way of presenting an established idea. ‘The Ghoul’ is one such refreshing example – at times I fought to follow the narrative because I didn’t want to lose the thread of interest being weaved around events.

“Fancy a cuppa? Normal or some sort of gay tea? We’ve got the lot.” Says Doctor Morland (Geoffrey McGivern) cheerily, welcoming depressive Chris (Tom Meeten, who has a look of Neil Gaiman about him) into his home, the unorthodox place where Chris’s demons are to be confronted. Meeten plays Chris brilliantly, and through the writing/directing, Gareth Tunley really conveys to us the unending depths of despair he suffers as everybody around him leaves or betrays him. Meeten is immediately engaging and has our sympathies with each new heartbreak – the most callous of all is in the casual abuse dished out by Kathleen (Alice Lowe). All the cast (including Naimh Cusack and Paul Kaye) are excellent, in fact.

There are lots of shaky panoramic views of a twilight metropolis: a travelogue of a silhouette city. It’s interesting that among the credits, the excellent Ben Wheatley (Director of ‘High Rise’, ‘A Field in England’ as well as a couple of Doctor Who stories from 2014) features as executive producer. The sprinkling of such city-scape imagery contrasts with Chris’s isolated torment as the demons continue to grow.

It would be too easy to dismiss this as another ‘were the demons real, or all in his head’ essay. ‘The Ghoul’ has so much more going for it than that. A labyrinthine modern day Lovecraft parable that only disappoints at the end - *because* it ends. The journey is more powerful than the destination, perhaps? Either way, I’ll be watching this again more than once, but not so much so that I know each line before it’s spoken; I don’t want to lose the disturbing, frightening atmosphere. A brilliant film - highly recommended.

Unwatchable. Dreary characters and one of those films you can tell in the first 5 minutes is going to be dire. Twenty minutes later I had had enough and pressed the eject button!.. Really don't know who these rubbish films ever get financed.

Worth watching - The Ghoul review by MF

Obviously low budget but all the better for that …. and infinitely more engaging than the usual Hollywood tripe where the only scare to be had is a piece of (bad) CGI jumping out the screen at you. Made the viewer think harder than the average horror film and the disc always has the brilliant, "The Baron", in the extras to lighten the mood.

I will keep this short and sweet. Absolutely abysmal film. Completely nonsensical from start to finish . Terrible script. Terrible acting. Cannot say anything good about it. DO NOT BOTHER WITH IT.

Very odd, tricksy, alleged thriller which morphs into a study of mental illness - The Ghoul review by PV

This is an odd film - it starts as though it'll be a thriller, a search for a killer, then morphs into a study of mental illness and fantasy really. I get tired of these post-modern tricksy scripts. Ditto with SHUTTER ISLAND etc and JACOB'S LADDER. Post-modern muppetry bores me and is not nearly as clever or original as it thinks it is (read TRSITRAM SHANDY or SWIFT).

The older man playing the shrink steals the show. Can't remember his name.

Alice Lowe (who wrote, directed and stars in the weirdly funny PREVENGE) has cornered the market in playing nutty psycho women, but here plays relatively normal.

It's interesting, to a point, but does get very slow and lacking in action - there's only so much of watching a man sit on a bed with his head in his hands that one can take.

Maybe 2 stars therefore. It's just not cinematic enough and after grabbing the attention in the opening scene, fails to maintain its grip.

Probably not what you're expecting - The Ghoul review by CM

A very clever, labyrinth of a film, which takes you back and forth on what you think is happening.  If you like jump scares and a linear narratives this film isn't for you.  If you like more of a head trip, then it definitely is!  I had no idea where it would go next and I loved it.  One of those films where images keep popping back into your head.  Thoughtful, twisted and creepy.

Avoid - The Ghoul review by AK

Not sure why I chose this. I think I confused it with another film or perhaps I was fooled to believe some good reviews from somewhere. I would check the background of any film especially British. And especially made by a bunch of Tv comedy mates who are all in the cast. Brit Comedians from my viewing experience might be ok for TV sketch shows but they haven't got a CINEMATIC bone in their body.

Unfortunately due to the comedy mafia, somehow funding is given to these films. And 90% are very bad. Even when trying to make a so called PSYCHOLIGICAL THRILLER. I don't like to judge and review anything I haven't seen from begining to end in real time. But for this film I'll make an exception to warn viewers especially if they have a limited amount of films to see on their subscription.

I will always give at least a half hour or more to judge if I'm going to like this. Basically having a manic depressive main character with mental/schizophrenic issues played by a poor actor with zero screen prescence is the first turn off and you can almost predict by the thread bare production design (a chair and a table) that the filmmakers low budget hasn't really challenged them creatively, so the best they can do is endless clichesd montage of psychadeilic shots of roads, ceilings , sky etc and talky talky scenes in a room by familiar faced actor comedy mates who are really their to give support to the writer director mate. Anyway saw all the twisty turny stuff coming in the first ten minutes and the way it was going to be shot. I was even bored on fast forward. Some good reviews compared it to Lynch. If you like Lynch you will like cinema. This is nothing like Lynch and nothing like cinema. Not even TV. All comedians really want is to be dramatic actors /writer direcrtors eventually so they're respected and treated seriously in the Film Industry. Some make it with good material but unfortunately this was not one of them. AVOID LIKE THE PLAGUE.

Dreadful ! - The Ghoul review by si

Absolutely abysmal in every sense..I couldn't bare anymore of this awful rubbish aftet 30 minutes had to shut it off & take a couple of asprins! AVOID this dvd like the plague