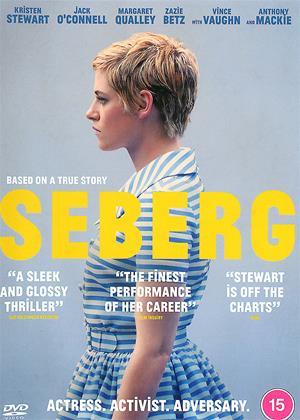 What a waste - Seberg review by Alphaville

You know how bad films seem even more disappointing when they have a wonderful subject matter to work from? Well here’s a prime example. In films such as A Bout de Souffle (Breathless) Jean Seberg was a muse to the filmmakers of the 1960s French New Wave. So what does this bio do — concentrate solely on the few years when the FBI’s men-in-suits investigated her for her involvement in the Black Panther movement in the US. It’s a dull tale. Did the filmmakers learn nothing from the films of Godard, Truffaut and other greats who showed how imaginative and exhilarating cinema can be?

Worth seeing - Seberg review by CSF

A fascinating film but it leave a lot of questions behind. It is not a bio of Seberg, it is an extract of her life. It is well made and Kristen Stewart is very close to her model in manners and appearance. Romain Gary was such an important figure but in this film, he doesn' t show his influence, his grief or his talent. Also she was an important figure in the New Wave of the French cinema she was representing. The film should have been called 'Jean and The Black Panther'. I am afraid it is a typical superficial but entertaining Hollywood film.

Worth saving from the burning stake. - Seberg review by RP

At times an overly simplistic version of events in a brief period in Jean Seberg's life. But well worth watching if only as a brief education to the times that are portrayed. The character portrayals are well done if a little one dimensional. The frustrated, neurotic and ultimately tragic figure comes over well enough.

There may and probably will be a better film made of the life and times of Jean Seberg. Nevertheless, I didn't think this film was quite as bad as critics at the time and since would have us believe. Especially for those who know nothing of the times or the famous people portrayed.

Seberg (aka Against All Enemies) review by Mark McPherson - Cinema Paradiso

There are several moments in the mildly meandering Seberg where I often found myself lost in Kristen Stewart’s beauty for portraying French New-Wave actress Jean Seberg. With her well-suited pixie-cut and immaculate innocence, there’s a certain appeal to her presence that makes one long for her to star in something akin to the pictures Jean became most known for. Naturally, however, one wouldn’t hope she’d go through the same trauma of nearly being burned by Preminger or hounded by the FBI. Going further, Stewart deserves a better film than this surface-scratching thriller, more interested in staging by-the-numbers docudrama than deeper exploring the nature of security and racial divide.

The film is set during the late 1960s when Jean started to make herself known in more American films, jumping into Hollywood productions that desired her beauty. One of the first people she encounters and takes great interest in is Hakim Jamal (Anthony Mackie), a civil rights activist who tries to maintain a voice in a world that is silencing black people. Seberg is tantalized by the idea of black power and when offered solidarity within his movement, she curiously accepts. And since she’s in an open relationship with her husband, it’s a fascination that turns sexual.

On the other side of the coin is the FBI, seeking to target and shake up black activists, under the operation known as COINTELPRO. They set their sights on Seberg for being a supporter of black movement groups and offering to fund. From the moment she gets off the plane, they’re already snapping photos of her and preparing to bug her place. Collecting this data is agent Jack Solomon (Jack O'Connell), a man who is established bluntly as someone naively being consumed by the American dream. He has a wife, a child on the way, and adores Captain America comic books. However, as his investigation continues, he soon realizes just how insidious his organization is for their targeting. This would seem obvious but it isn’t for Jack until he witnesses the cold condescension of agent Carl (Vince Vaughn) or the gruff barking of his superior Frank (Colm Meaney).

The film encapsulates the era but also lingers on it with all the grace of a reluctant book report. We’re let in on a few specifics of the black power movement, the unethical means of the FBI, and a sprinkling of Hollywood allure. But there are so many aspects that seem underdeveloped for how interesting they could be. Stewart does such a great as Seberg in her sequences where she loses her mind and feels completely unsafe when knowing the FBI is targeting her. So little time is spent on that desperation that it feels like we’re missing out on a whole other half of a film. Jack's reluctance and regret for targeting Seberg don’t grate on his soul as much as it feels it should. And since they are the key figures in this questioning of security, much of the black movement is shelved by the second act, almost mercifully before Jean and Jack become too much of a white-savior, in a film where Zazie Beats is sadly underused once more.

Seberg never quite sticks a landing for trying to highlight the actress and the era, smearing all the politics and paranoia into a 1960s slosh. Though informative and intriguing, the direction comes off so blunt and overproduced with a soundtrack that never shuts up it can be hard to view the film more from the perspective of the characters than the basics of their actions. It’s enough to make one long for a better film of both Stewart as an actress and Seberg as a person. Such talent is nearly squandered in a film that wants to be about race relations and the questioning of security without saying anything all that profound in the process.