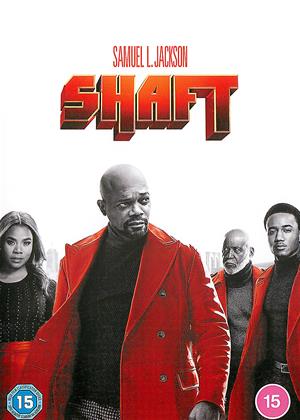 Generational crossover events tend to always have a sloppy assembly. From the various reunion specials of Doctor Who to the torch-passing of Star Trek Generations to teaming-up of all Power Rangers, every assembly of roles young and old tend to feel about as awkward and forced as any family reunion. Shaft is cut from the same cloth, taking the iconic badass and pushing together the oldest Shaft, the slightly older Shaft and the youngest Shaft of them all.

Though the film features a clashing of the young and the old, it becomes very clear that this is a film that favors the older crowd with their older ways, not merely from Shaft being a dated profile. JJ (Jesse Usher), aka John Shaft Jr. III, is posed as a smart enough guy to be a cybersecurity expert considering he graduated from MIT. But he faces tragedy when his friend ends up dead and needs to figure out who killed him. The film wants us to accept that this highly educated young man requires someone with street smarts to get to the bottom of this case. More importantly, the film wants to make the case for how Shaft can still be relevant.

Into the picture comes the original John Shaft Senior (Richard Roundtree) and the more modern John Shaft (Samuel L. Jackson). So many questions are raised from this staging, considering Roundtree is not much older than Jackson. At any rate, they’re called in by the youngest John to investigate the matter that will take them into the tough streets of Harlem and its criminal underworld. What follows is your standard regressive Boomer bombast of old guys yelling at people to get off their lawns with their 21st-century ideas, that postmodernism has failed the action hero.

Of all the films to be dug up, Shaft is the most confounding. In the 1970s, the street hero was posed as the badass rebel who was perfectly placed in the blaxploitation era as an outlaw of the white mafia trying to target black people. But who is Shaft rebelling against in 2019? Millennials and snowflakes? The criminals they fight are so generic and bound by a very uncomfortable level of Islamaphobia, especially in a film that argues for Islamaphobia by portraying the media as wrong for criticizing the FBI on this matter. Shaft was once an anti-hero who fought against the establishment, from a time when he would be highly skeptical of the FBI. Now he’s working for the establishment, trying to prove that the FBI was right for being suspicious of Muslims. That is a horribly nuclear take for digging this character out of his 1970s coffin, constantly reminding the audience of why he should’ve stayed there.

By the 2000s, even when Samuel L. Jackson played the role, Shaft was a joke. He was a punchline of the blaxploitation era, a suave satire of dated ideals in cool with a retro-chic flair. The character hasn’t aged well in a film that poses his ideals amid crime-fighting as being awfully outdated. In an age where the times have changed greatly from 40 years ago, Shaft either needs to get with the times or shut his mouth. I can’t dig this.