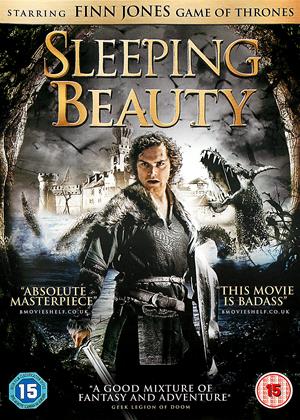 Okay, well… Sleeping Beauty by promising star Casper Van Dien (Starship Troopers) is a low budget straight-to-YouTube feature that also has Casper’s wife and his three daughters taking part in it, as the royal family respectively. Whether he lost a bet, or tried to cram his closest family in a full-fledged flick where fairies dwell, but also heads get chopped off like is no one’s business – remains to be seen. As it is: Casper’s take on THE Sleeping Beauty is watchable at least for the lols if not anything.

Sleeping Beauty, or rather the 2014 incarnation of said fairytale of old, is an interesting take by then fist-time director Casper Van Dien (he will go afterwards to direct two more films as of 2017) and features monsters, fairies and Grace Van Dien filling the titular role of Princess Dawn aka Sleeping Beauty. The plot follows a familiar pattern: a king and queen of distant lands have a daughter, and occasion for which they humbly invite the whole kingdom, except for one particular person who also happens to be the twisted sorceress with borderline unlimited special abilities and powers. So, as the story goes, the sorceress barges amidst the celebration and curses the newborn child to die at the age of 16 while being pricked by a spinning wheel. The good sorceress however twist the curse so that Princess Dawn doesn’t immediately depart after stabbing her hand, but falls asleep instead until a handsome prince will kiss her and lift the curse forever.

Or so we’ve been told.

However, the producers (The Asylum - a production house that rips off blockbusters and snatches some of their potential audience by naming the films similar to its blockbuster counterparts) had to fill the time in-between the curse and the ‘happily-ever-after’, so they’ve invoked bunch of other crazy stuff to fill in time, like massacres by beheading bad dudes, internal body parts being pulled out from whence they’ve previously resided, and lo and behold – zombies. That’s right - Sleeping Beauty has some zombie action going on there, just for good measure.

The acting and the plot… there isn’t any – or at least the good sorts of it. Since Sleeping Beauty features the whole Dean ancestry, including his daughters Maya Van Dien and Celeste Van Dien as Newt and Serene respectively, his wife Catherine Oxenberg portraying Queen Violet, while Casper Van Dien himself plays King David and also helms the flick – one wonders if this would sneak into place by replacing their wedding VHS or such.

Whatever the reason, the film already got made, so there is no point in arguing its potential origins (theme for the most peculiar documentary one hundred years from now?)

Bottom line is, Sleeping Beauty features some of the worst acting and one-liners ever captured on digital, while the special effects are ‘special’ in their own rights. Still, it’s (strangely) not the worst feature you’ll ever see in this century and for that – I will give it some room to breathe.