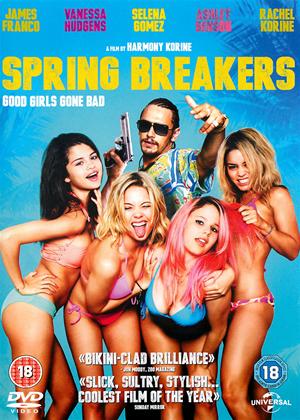 Cinemadiso's What I Like About New Movies
15 films by cinemadiso

I think that calling this a comedy is going a bit far... - Spring Breakers review by CP Customer

A very odd film with a terrific sense of foreboding. The huge amounts of flesh on screen somehow fail to be alluring. Acting is pretty strong, though the story-line is unbelievable. I preffered Kids to be honest, this seemed a bit of a rehash.

With an incredibly deceptive name and casting choices I expected Spring Breakers to be a poorly executed holiday comedy for the masses; Four Christmases meets Wedding Crashers. The first thirty seconds of footage quickly proved me wrong however.

Opening on scenes of what I can only imagine are real American college students on spring break, dancing, drinking and doing any number of explicit things on the beach while taking time off from school the film quickly indicates that it intends to show the nasty and dirty truth behind spring break.

Four beautiful young women, Faith (Selena Gomez), Candy (Vanessa Hudgens), Brit (Ashley Benson) and Cotty (Rachel Korine) are determined to get out of their small home town and go away for spring break, despite having no money. Their journey officially begins when two of the foursome hold up a fast food restaurant using hammers and realistic looking toy guns, justifying it by likening it to a video game. From here the four go to Florida where, after a particularly raucous party, they are arrested and subsequently bailed out by Alien (James Franco) a local drug dealer and gangster. Faith’s Christian beliefs cause her to return home after the girls encounter with Alien, leaving Candy, Cotty and Brit behind.

With plenty of quasi-contemporary and relevant cultural and pop references it’s obvious what writer/director Hermione Korine was trying to achieve here; but there is a distinct lack of characterisation amongst the four girls (despite many charming little scenes clearly intended to humanize them), which ultimately makes it hard for us to care about what happens to them, wasting any potentially interesting social commentary.

The girls’ motives are clearly supposed to be questionable, but the lack of depth demonstrated by each girl – regardless of moral fibre – just makes them seem like spoilt and thoughtless children. The ultimate outcome of the piece doesn’t help matters either, with very little to show for the whole experience, both negative and positive, the four girls eventually return home. Now I’m not saying everything should have been tied up nicely with each girl learning something about her, gaining moral perspective or at least getting a good telling off; but after sitting through all of that any audience would expect some form of resolution. Instead Korine just seems to let the whole thing flounder, loosing any sense of character in an overplayed and unimaginative finale.