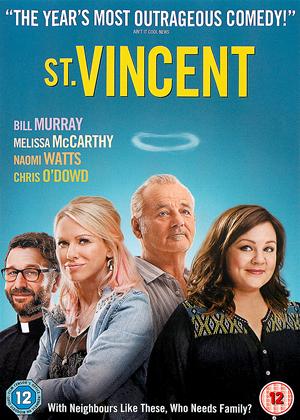 I really loved this movie - which is just the right side of 'feelgood' and 'American schmaltz'.

Often I dislike Bill Murray, mainly because of the movies he is in (many of which I think over-rated, like that Japanese advert movie).

But here he is excellent in a neatly plotted movie that never sags and has some genuinely interesting and believable characters.

Full marks too to this film for daring to state that a boy needs his father and not always siding with the mother - which is the pc propaganda of most Hollywood films (and all BBC drama!).

A comedian well-known in the UK, Chris O'Dowd, is hilarious as the mad funny teacher at the private Catholic school the boy goes to (there being no religious state schools in the USA).

The boy too is good - but arguably too small for his supposed age (12). But then movies always like em little...

The film really works, however, because of the writing - and a neat plot with subplots which allow Bill Murray to make the most of his old grouch role. Minor characters are great fun too - like the Russian 'lady of the night', the try-to-be-nice mum, the local bar flies etc. The music is great too.

To my surprise, I absolutely loved this movie (and wonder why we Brits just cannot seem to make such efficient film comedies).

Bill Murray has something that keeps your attention, but the little boy almost upstages him! After he has a stroke he becomes a re-run of Caddyshack character, with the slurry speech, so is a nice touch.

One of those films that could easily slip into the banal Adam Sandler/Diz Waltney genre, but is fortunately saved by the main players.

If want to see a pleasant film with no exploding livers or plastic robots, then this could be one to book..........

St. Vincent is an all too familiar story with an all-star cast of top actors giving it their all to make it so much more. You wouldn’t think of Bill Murray for the first choice of a grouchy old man living in Brooklyn, but it works. You probably wouldn’t immediately cast Naomi Watts as a pregnant Russian stripper, but she pulls the role off with flair. One might also assume that the whole story of an old bitter man showing some love towards a curious kid is a tired concept and it is. But, wow, does the right cast make a world of difference for a movie that could have been forgettable with a cast that elevates the content far higher than I’d thought possible.

Bill Murray plays Vincent, a retired veteran with a mountain of problems. His meager budget is sucked dry by his crippling gambling addiction and paying for the medical care of his stripper girlfriend Daka (Naomi Watts). With his funds dwindling and his bookie (Terrance Howard) breathing down his neck, he needs to make some quick cash fast. In walks his new neighbor Maggie (Melissa McCarthy) with her cute 12-year-old boy, Oliver (Jaeden Lieberher). With the poor bullied Oliver requiring a babysitter after school, Vincent swoops in to collect some money for such a task. At first Vincent is just his usual crass self, feeding the kid stale crackers with tuna and cussing a storm up in front of him. But, after some more time is spent with one another, they form a kinship that makes the old grouch’s heart grow three sizes.

If you’re familiar with movies like Bad Santa and Bad News Bears, you can set your watch to this type of script. The scene where Vincent teaches the kid how to fight and stand up to the bullies arrives right on schedule. The scene where Vincent’s current state is pitied pulls into the station like clockwork. And the moment where Vincent is held up as an idol by the cute kid even comes with with plenty of advance warning. Just about every plot point is completely predictable with few surprises as far as the story is concerned.

But any premise can be done well and writer/director Theodore Melfi knew how to make it work. He has assembled a stellar cast that really bust their humps to tap into ranges outside of their usual roles. Murray completely disappears into the role of a bitter elder, but doesn’t lose any of that charm which makes him undeniably hilarious. Naomi Watts also throws herself face first into the Russian stripper role, nailing the accent and mannerisms with grace. Some of the roles feel like perfect fits with Melissa McCarthy as the overworked mom and Chris O’Dawd as the Catholic school teacher, but they even manage to pull off some surprising performances as well. And they're all given hilarious lines of dialogue to work with in a picture that is guaranteed to deliver as many gut-busting laughs as heartwarming smiles.

The heart and soul of this movie lies entirely in Murray’s performance. He has exceptional timing when it comes to delivering both shocking dialogue and touching emotion. He’s clearly reaching deep into an aspect of his acting we haven’t seen in a very long time. While this may not be the best role of his career, it’s the most divergent enough to be a notable addition to his resume. Director Theodore Melfi has so much faith in Murray’s abilities he ends the film with Bill casually watering his backyard while singing with headphones on his ears and a cigarette in his mouth. It’s such a simple scene where nothing really happens and the camera is entirely stationary, but it captures our attention because of Murray’s charisma which shines through in such nothing moments. That one scene perfectly sums up what makes St. Vincent such a fun movie; it brings charm and draws our eyes to something that would seem routine and played out by any other group of actors.