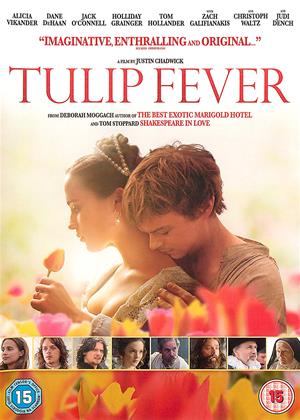 Not for me - Tulip Fever review by CR

Persevered to the end but confusing, hard to follow and didn’t really enjoy it. Can’t recommend it and very disappointed.

I enjoyed watching this film, though yes, it does lapse into romantic melodrama - a tad Mills and Boon really. Tulip Fever was a best-selling novel, and I suspect 95% of the readership was female too - so it's one of those movies.

Oddly, for a movie based on tulips, there are very few flowers to be seen here. Maybe because it's mostly filmed in studios?

Some period detail is good and interesting, especially for those who previously knew nothing or little about the tulip bulb craze in Holland in the late 17th century - a financial bubble, repeated many times since (South Sea, Internet etc).

I did have an issue with the casting, though Tom Hollander is excellent as usual, here as a dodgy 'doctor'. Some great minor characters, and Judi Dench phones it in as an old nun.

I have seen a great many paintings of this golden age of Amsterdam, with wealthy businessmen, and not one was black - some servants were and sailors. But to cast a black actor as being central to the tulip trade is just plain silly - like casting a white ginger man as a Zulu chief. I wonder whether this is being loyal to the novel or something added for the sake of 'diversity'.

Anyway, if you enjoy long-winded romantic melodramas, then this is for you - though the plot is about as believable as Star Trek.

An historical potboiler set in 17th century Amsterdam, making best use of its one-street outdoor set by filling it with local colour. It bowls along pacily enough, but the downtrodden-wife-strays plot is all too familiar and the characters have no depth. With no convincing characters, the sex scenes are unrealistic and the background of the tulip market (the dotcom boom-and-bust of its time) is little more than a distraction. The increasingly farcical plot spirals out of control and becomes reliant on a number of laughable coincidences. It may work in the original book, but it just seems silly in the more immediate medium of film. It keeps you watching, but it’s all a bit ridiculous and inconsequential.

I am not one for romantic movies but this one wasn't to bad .. I love the architecture and the costumes .. Good cast and quite a interesting story..