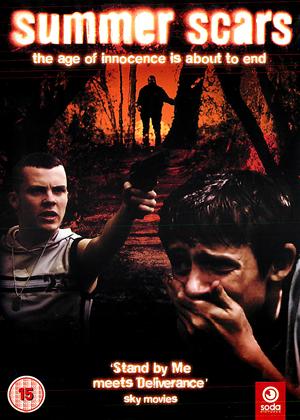 Synopsis:
A gang of friends play truant from school to hang out in the woods where some hot rodding on a stolen moped changes the fate of their day. They crash into Peter, a disheveled drifter, who is delighted to have a group of teens to hang out with. First he gains their trust by joining in their games, but then his behaviour begins to change. Peter uses what he has learned about the kids against them, bullying the alpha boys, belittling the weaker ones and saving his worst for the only girl of the group. Realising too late that they are being held hostage the kids have to resort to dirtier games to survive the ordeal.
Actors:
Kevin Howarth, Ciaran Joyce, Amy Harvey, Jonathan Jones, Darren Evans, Christopher Conway, Ryan Conway, Ben Hanson, Chole Parfitt, Patricia Marsh, Noreen Weekley, Alex Dando, Kate Williams, Michael Taylor, Christie Saunders, Scarlet Thomas Perry, Leigh Murphy, Daniel Mills, Josh Lovell, Mike Hodgetts
Directors:
Julian Richards
Producers:
Julian Richards, Sabina Sattar, Mike Tims
Writers:
Julian Richards, Al Wilson
Studio:
Soda Pictures
Genres:
British Films, Thrillers
Countries:
UK

I had low expectations of this, especially when the graffiti credits started the film to a rap soundtrack! However, the script is so obviously well-written by an excellent writer (Al Wilson) and the main character's development and lines so believable, that I was won over. The performances of all the teenagers, some playing their age and some playing down, are also authentic and spot-on.

The extras here are worth watching esp the half hour film on THE MAKING OF - the director Julian Richards is interviewed as are all cast - Including Kevin Howarth who plays the mysterious and erratic 'disheveled drifter' the kids encounter in the woods. His Sheffield/South Yorkshire accent as the character is bang-on despite it not being his own. That accent makes the stranger even more strange. What precisely is he doing in some woods in Wales? On the run? Escaped? Just homeless?

I was surprised this script started as a film screenplay and not as a theatre play - though I suspect the writer comes from that background. The moody mercurial disturbed person who can switch from nice to nasty and back again in the blink of an eye is rather a staple of drama in theatres.

But no matter, the dialogue is spot-on and there is NO flab at all on this film! Which is always nice to see,. Why its running time is just over an hour.

There is real menace here in the main character, and humour aplenty too, and the teenager characters are believable. No doubt these days, a disabled kid would have to play the disabled kid character - yet more absurd 'authentic casting'. I do so wish they'd all try acting. This is NOT progress. I dread to think what this would look like if the box-ticking BBC made it as a drama now (and BAFTA has its race/gender diversity quotas now too...)

As ever, Darren Evans - here 17 playing down in age - excels as an actor (see him as Baz the junkie in A StreetCat Named Bob and many a Welsh-made film).

This is a true British film and I liked the twist ending (no spoilers). No state funding that I can see (lottery and BFI funded films do not tend to be was watchable and entertaining as this).

It's nice to get really contemporary technology into films - though one wonders how playwrights and screenwriters of a former age would have coped with the existence of mobile phones or smart phones, where everyone can inform everyone else of everything instantly! A teeny-weeny plot hole may exist in this film because of that, but not so much as to spoil it.