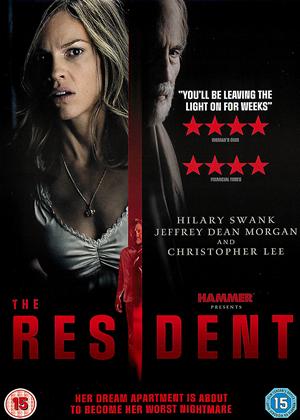 Reviews of The Resident

From the production company that has been bringing horrors to our screens for over fifty years, Hammer Film’s The Resident stars their very own resident performer Sir Christopher Lee. Hilary Swank and Jeffery Dean Morgan also star in this story of an Emergency Room doctor who finds herself in need of an apartment after a painful split from her long term boyfriend.

Swank, who plays lead Juliet, stumbles upon a beautiful 1940’s loft apartment in a New York building. Her new landlord, Max (Morgan) and his family have owned the buildings for the past seventy years, however now all that remain are he and his aged grandfather, played by veteran Lee.

Juliet can not help but find herself attracted to Max, who is charming and honourable yet somewhat unsocial and naive. She begins a somewhat misguided relationship with her landlord, only to end it suddenly when she finds she cannot stop thinking of her cheating ex-boyfriend.

Meetings and conversations with Jack, Juliet’s ex who is played by Pushing Daises Lee Pace, rekindled their relationship and Juliet finds herself having a painful conversation with Max in which she explains that they can be nothing more than friends.

Meanwhile strange things are happening at Juliet’s apartment and it transpires that Max has built secret peepholes and corridors in the building so that he might watch Juliet as she goes about her day. Things escalate and Max begins breaking into her apartment, lying in her bed, smelling her clothes, using her toothbrush and masturbating in her bathtub. Things reach a head when he begins sedating Juliet as she sleeps, causing her to sleep through her alarm clock on several occasions. Feeling uneasy Juliet has a security camera system installed and has her blood and urine tested one day whilst at work all leading to her discovering Max’s terrifying secret.

Early on in the film the friendship between Juliet and Max seems harmless and you begin to suspect that it is the grandfather who has the perverse intentions toward their new tenant. However the film catches you by surprise when it is revealed that the down to earth and sweet character of Max is in fact dangerously obsessed with Juliet. His twisted voyeurism fills the movie with a disturbing tension that you would expect from a thriller, whilst the dark and gloomy camera work and settings hark back to the film’s exploitation roots.

Ultimately this film achieves precisely what you would expect it to, suspense, violence and that creeping fear of a truly disturbing narrative. It is hardly the most original film of its genre and nothing about the performances particularly stands out but as horror-thriller hybrids go it is absolutely satisfying.