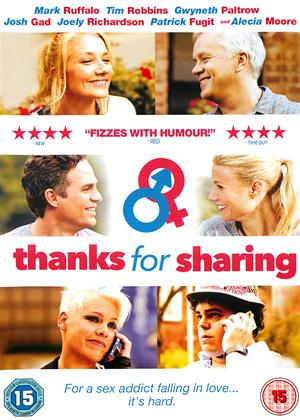 Reviews of Thanks for Sharing

Thanks for Sharing review by George Hooper - Cinema Paradiso

While its admirable to make a film devoted to an extremely taboo subject like sex addiction, Thanks for Sharing feels ever so slightly toothless. Sure there are plenty of expletives, some illicit and occasionally disturbing sexual acts but at the end of the day this is a harmless rom com, a tale of supposed fortitude against a damaging disease that the film makes look like a walk in the park.

Thanks for Sharing follows sex addicts Adam (Mark Ruffalo) and Neil (Josh Gad) as well as alcoholic Mike (Tim Robbins). The film follows the three as they live their lives constantly trying to cope with their demons as Adam begins a brand new relationship, Neil faces a tough climb back up from rock bottom and Mike must contend with the return of his son, a fellow addict and someone he failed as a father.

The film starts with plenty of promise and more than a few laughs but it pretty much just dies around the halfway point. The characters begin to become cardboard cutouts of the kind of people you expect to look up to, not the afflicted self conscious people that they are. Adam and Neil never really struggle in the true sense of the word, when they do slip they find their ways back through acceptable hollywood methods.

The film tries to be edgy, be something new and exciting and while the theme of sex addiction is new, it also is hard to fully understand. With drug addiction or alcohol there is something to blame, something tangible to base your hatred around, a pill or a bottle. With sex addiction its hard to know what to hate, what to think because it isn’t understood and Thanks for Sharing ironically never quite shares what it is we should know about the disease going in.

What could have been interesting has become a oftentimes generic relationship drama and it shows in the performances with most performers coasting through the film. Some people may feel empowered by it, the honesty of the characters and the genuinely funny script but ultimately it feels like emotional grandstanding for no reason whatsoever