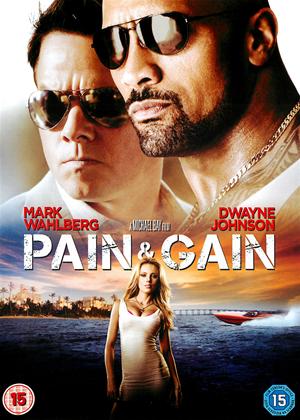 Reviews (2) of Pain and Gain

Pain and Gain (2013) - Painful to watch, and little to gain from watching it - Pain and Gain review by CP Customer

Comedy of Horrors - Pain and Gain review by NC

Pain & Gain is as much a film about self delusion as it is about self obsession as viewers are treated to two hour tale of disturbed individuals doing horrifying things for supposedly good and morale reasons. The only problem is people in the real world and not in a Michael Bay film know better.

The film follows Danny Lugo (Mark Wahlberg), a personal trailer who takes it upon himself to make up for all the wrong in the world, one rich man at a time as he enlists the help of Paul (Dwayne Johnson) and Noel (Anthony Mackie) in kidnapping a rich and powerful member of Danny’s gym so that they may torture him for all his money. However when things go sideways, the three get caught up in the money and excitement as things take a drastic turn.

While Pain & Gain is a strangely funny and off the wall thriller it is also a Michael Bay film, a film that uses the films true story (something Bay reminds audiences over and over again) and blows it way out of proportion. Characters behave irrationally for the sake of the story, there is little development to any of the films leads and the film has at least a few pointless action scenes to fill time.

That being said the film is a terrific comedy but it’s balance between comedy and drama is where the film falls down. Not only does the tale take an oddly dark turn in its final act but none of the films characters seem to have noticed. For example when Danny is picking pieces of brain out of the carpet next to a dead man, Bay and Wahlberg are looking for the next laugh as if Pain & Gain has been a black comedy this entire time and someone forgot to tell the people watching.

However the films overall message of self obsession and how self worth can often lead to lapses in judgement and bad decisions is a clever idea for a picture, it’s just a shame Michael Bay spotted it first