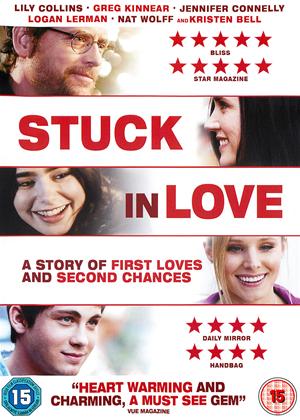 Reviews (1) of Stuck in Love

Too predictable, no depth to the characters, everyone moves on to an even happier life than before and all is well at the end

Films like Stuck in Love have the tendency to play like a overly serious romantic comedy but this Greg Kinnear vehicle shines with its subtle performances and sharply written dialogue. First time director Josh Boone has created a clever story of love, trust and loyalty which unfortunately loses its way in it’s neat and tidy conclusion.

Stuck in Love follows William (Kinnear), a renowned writer who is wallowing in self pity following his separation from his wife Erica (Jennifer Connelly). His kids, Sam (Lily Collins) and Rusty (Nat Wolff) are trying to come to terms with their new lives and how to look at relationships following their parents separation.

Boone’s tale ebbs and flows in a very natural way and his actors clearly love the material with Collins shining as the two sided Sam, a petrified, yet tough girl unsure of where she belongs in the world in the shadow of her father. Wolff makes Rusty the moral compass of this dysfunctional brood, a teen whose writing is an extension of himself, a trait he shares with his father. If anything Kinnear is the one almost trapped in a loveless role as he orchestrates the major plot twists and changes but rarely has the standout moments Wolff or Collins enjoy.

That being said Kinnear makes William a deeply sympathetic man, not the hero or everyman expected from a piece like this but a flawed, self destructive and deeply guilt ridden man in need of a stiff kick up the kiester.

Boone loves looking at the duality of people and the films dialogue more than shows two sides to every coin. However the film is really about the actors, the performances and how these characters words come through them.