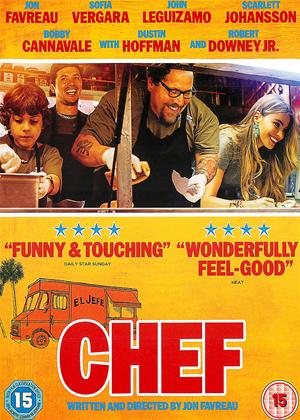 This film is foodie fun - and worth a watch. Like a fantasy or a fairy tale about how the American Dream is just wunnerful... The US is good at these short comedy films - they don't drag like so many UK film comedies.

If this were remade in Britain it'd star Lenny Henry playing himself as per usual, and Sanjeev Baskar, be about curry or West Indian food (not really all that great IMHO)and the race relations polemic would be rammed home continually in a smug and worthy BBC fashion. Happily, this movie puts the story and characters first - and the food, of course.

It's part road trip and part 'little man takes on the world and wins against all odds'.

Truly unbelievable though - food critics are really not like this in all ways. And wives of unemployed chefs do not live in mansions either...

This is the first film I have seen to feature Twitter as a major plot point though...

An odd soundtrack - maybe just the director's favourite mix tape! Bizarrely, A Message to you Rudie is used (though this is all about restaurant and then Cuban food). Weirdly, one scene features two men singing a Hispanic version of Sexual Healing by Marvin Gaye to a 10 year old boy. (People have been arrested under operation Yewtree in the UK for less!)

3.5 stars - I enjoyed some jokes and the frustration of the main character of talentless venomous critics - and the food, despite not being a big fan of that Cuban-style food. Watch and get hungry!

When I first saw the trailer for Chef I couldn’t wait to see it, it had a killer cast, a lead role for Jon Favreau (who also directed) and some great visuals that came close to food porn. What Chef is however is a pretty played out look into the relationship between a father and a son and while its easy to see why people might like the inspirational tale being spun here it all feels forced, like someone is pulling strings behind the scenes and if there is anything that reminds you that this is fiction its the idea that these characters are not their own.

Chef follows Carl Casper (Favreau), an extremely talented chef worthy of high praise according to most. However when a critic slams him online he finds his whole world crumbling and his job gone. Forced to live with the shame of his meltdown he finds a new way to do the things that he loves with the help of those around him who are looking to help out in any way that they can. However while he tries to reinvent himself he must also find a way to reconnect with his son, a boy who emulates him but doesn’t really know him.

Despite the beauty and attention to detail Favreau shows with his shots of exquisite looking food and kitchen etiquette the film plays with stereotypes in the way it handles its characters, they feel like cut outs in a film that has such passionate devotion to the character of food. The film spends too much time making a person out of its culinary creations that it fails to remember that Bruce and co need work too.

That being said the film really gets going in its final 30 minutes as Bruce’s ideas start to provide actual results and while you can feel free to take these moments and pretend they equate to a whole films worth of enjoyment its hard not to forget the hour or so that came before it. The fact that the film tags on an ending that negates almost everything the film had built towards is also a problem but in the grand scheme of things its the fact that nothing these characters do that seems believable that becomes the films real issue.