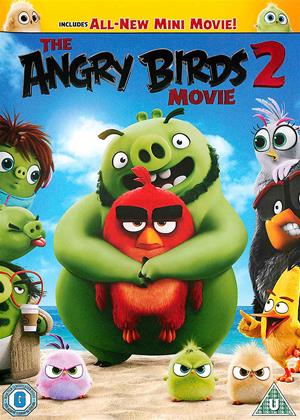 Reviews (1) of The Angry Birds Movie 2

Hard to believe a mobile game could spawn two decent cartoons but this is just as fun as the first one. There are also moments of inspired lunacy reminiscent on the old Looney Tunes cartoons.

The Angry Birds Movie was such a disappointment for starting off as an intriguing take on dealing with anger before sadly descending into mediocre mayhem of the birds battling pigs. Angry Birds 2 is at least a little bit admirable because there’s a consistency to its storytelling. The film makes its intentions clear from the start of the film that no grander goals or themes past the vanilla lets-get-along moral will be delivered in this forgettable farce. It’s blandly forgettable but it at least maintains this stance throughout.

The war continues between bird and pigs as they launch projectiles at each other from their respective islands. For the heroic bird Red (Jason Sudeikis), it sounds good considering the whole island depends on him and his angry bird pals for defense. It's somewhat telling and odd that such a society can still be cheerful with a constant war being waged, albeit one of the slingshots shooting crabs and rocks.

But that war may be coming to an end as both sides now face a mutual threat: eagles. The eagles hate both the birds and pigs because their leader really seems to hate living in a winter wasteland. Rather than talk to both islands she decides to just crush and invade with her custom made ice boulders that emit an explosion of lava on impact. Quite unexpected for an island of ice. The island is run by the tyrannical Zeta (Leslie Jones), perhaps the best-designed character who looks like a Muppet creation with her many feathers, big eyes, and long arms. But, of course, her battle is about more than moving into a warmer climate.

Very expected, however, is the rather by-the-numbers James Bond-style adventure of birds and pigs stopping an evil villain on their secret island base. There are slow-motion shots of our heroes walking towards the camera as a pop song plays, somehow designed to amplify their cool. They use plenty of gadgets to break into the secret base and try to foil Zeta’s evil plans, most of which don’t work very well which is mildly amusing.

While the film does have a good heart and better message than the previous film, it still stumbles its way into making its themes heard. On their quest, Red is joined by the bird Silver (Rachel Bloom), a scientist that is seeking to prove herself when nobody will listen to her. On their adventure, Silver will not only prove she’s the most intelligent of the group but that Red should stop learning to do things on his own and trust in others to not only save the day but hold him up. There’s also a romance between the two of them which gives Silver’s brother Chuck (Josh Gad) a running bit of telling Red to back off his sister. Unfortunately, that’s his entire bit throughout the film.

The Angry Birds Movie 2 tries to juggle too many characters that the film becomes muddled and lukewarm in its story. There’s a lot going on with relationships, getting along, working together and a B plot of little birds trying to save some eggs which is simple but at least more focused than everything. The humor is pretty much on par with the previous film, including one gross gag of urine once more. The voice cast is all solid though never really given much room to break out and emote. It’s a passive entertainment which I guess will be suitable enough for most young kids with its slapstick and goofiness but doesn’t expect it to carry much weight for anyone who needs a little more than breakdancing eagles to be entertained.