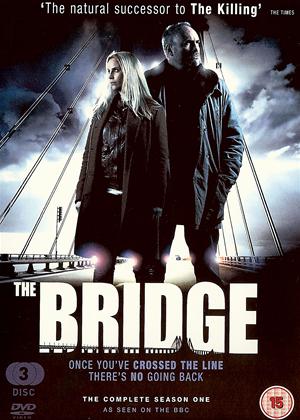 Yet another Nordic noir TV series - and again, it's excellent. This is a Danish/Swedish co-production, there are 10 episodes each about 57 min long, with subtitles. Don't let the subtitles put you off - this is great TV.

The bridge of the title is the Øresund Bridge between Denmark and Sweden and Episode 1 opens with the placing of a body on the bridge, exactly on the border between the two countries. A joint investigation is set up and the character and personality of the woman Swedish detective and the Danish detective assigned to the case takes up much of the detail.

While a really good crime story, the first half is a trail of false clues, then once the killer is identified it does become fairly predictable. What keeps it going is the character detail, particularly that of Saga Norén, the Swedish detective (superbly played by Sofia Helin) and Martin Rohde, the Danish detective (played by Kim Bodnia who I've also seen in two other Nordic noir series, 'The Killing' and 'Those Who Kill').

Sofia Helin plays Saga as a dedicated officer with a personality somewhere on the autistic scale, an obsessive worker with little or no inter-personal skills - and this leads to some quite humorous incidents and I laughed out loud several times.

I really enjoyed this series and consumed it in two non-stop viewing sessions. Great stuff - 5/5 stars.

[Aside: The music that plays over the start and end titles is 'Hollow Talk' by The Choir of Young Believers from their 2009 album 'This is for the White in Your Eyes'. I bought this album on the strength of this one song - but be warned, that's by far the best track]

Great characters - The Bridge: Series 1 review by none

My friends have been telling me to watch this for ages. Glad I did. I haven't seen the whole series yet, but so far am really impressed. Especially with the characters. Saga has to be the most original (and funny) female character in the history of TV detectives! Just shows what you can do if you're prepared to break away from stereotypes.

The Bridge Disc 1 - The Bridge: Series 1 review by EG

I am not qualified to write a review as I only watched one and a half episodes of Disc 1. I've heard nothing but good about this series, but I found it too gruesome and bleak to persevere. I probably should have done, as I expect I've missed out on a really thrilling (and chilling) experience.

Overdone, no I think not. - The Bridge: Series 1 review by JD

This Danish detective / crime drama has as its main character an extremely focussed female detective who is work obsessed. She is highly respected by all but patronised by many for her inability to relate compassionately to others. Sometimes this autistic personality trait seems to be a little exaggerated, but on reflection I think it was just at the limit of credibility, but no further. An awesomely accomplished performance.

The problem with the plot is that (without spoiling too much) the long build up turns out to be completely irrelevant; even at the end you are left wondering what the first 6 episodes were for, possibly just character build up. Having said that this is another Danish masterpiece which I waited by the letter box for.