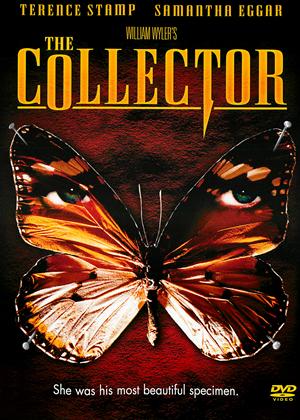 Reviews (3) of The Collector

Terence Stamp, cast just before his tenure as a sixties face, is a psychopathic butterfly collector, who collects Samantha Eggar's beautiful arts student. They make a great combination. Although the film is suspenseful and involving, it is as much about class, and the stultifying conservatism of post war UK, and its mistrust of modernism/modernity; Eggar the creative, liberated butterfly trapped in Stamp's killing jar. An excellent film which works as a very creepy thriller and a snapshot of its time.

Way back when, John Fowles was one of my favourite authors. He's perhaps best known for 'The French Lieutenant's Woman', 'The Magus' and of course 'The Collector'. I haven't read the book for some years and from memory there are some differences between the book and the film, but it's a pretty fair adaptation.

The young(ish) pre-fame Terence Stamp is excellent as the psychopathic butterfly collector and stalker Freddie Clegg, who wins big on the football pools and so can afford to buy a country house and convert its cellars into a cosy little prison for the next item in his collection, art student Miranda Grey, played by the lovely Samantha Eggar. Freddie is socially awkward and shy, professes his love for Miranda - but she is repulsed both by the fact that he has kidnapped her and by his butterfly collection, which of course he has killed. It can of course only end in disaster and without giving too much away, Freddie goes on to stalk again...

This is a claustrophobic psychological drama, superbly acted (the two leads won Best Actor and Actress Awards at Cannes) and directed. Great stuff - with an excellent 1960s period feel that places it firmly in an era just a short time ago, yet so far away.

If you enjoy a creepy thriller then give this a try. 5/5 stars - excellent.

Extremely good performances by Terence Stamp and Samantha Eggar in this unusual sinister movie. Although slightly dated the performances make it entirely watchable, together with the glorious technicolor and somewhat unexpected ending.