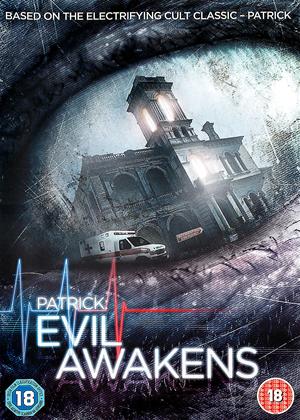 I was watching 'Game of Thrones' in which Charles Dance plays a major role and wondered what else he had done recently - and found this. It's a low budget, subsidised Australian production so quite how Mr Dance was persuaded to act in this 'mad scientist' movie we'll never know. Maybe he needed the money?

Mad Scientist experiments (of course) on creepy comatose patient in creepy private clinic. Naughty Nurse tries to stop him. Patient gets revenge (of course) via telekinesis. Err, that's it.

Charles Dance is the best actor by miles, but Sharni Vinson (late of the Aussie soap 'Home and Away') plays a reasonable role as the Naughty Nurse. I did see Ms Vinson in the 'masked intruders' movie 'You're Next' which was far more gory than this one.

It's mildly creepy and psychological rather than a horror movie, there aren't any real shocks or gore, but there are a few bare chests. Quite why it got an 18 certificate I'm not certain - I've seen more shocking 15 cert films.

In the UK I think it was shown at a film festival then went straight to DVD. The title was originally just 'Patrick' and quite why it was changed for the DVD release we can only guess - it's also a remake of the 1978 film 'Patrick'. There are a few nods to the 1978 original - nurse's boyfriend is called Ed Penhaligon (Susan Penhaligon played the original role), the actress who originally played Patrick's mother gets a bit part...

At best it's average, not to mention very corny, so I'll give it an 'average' rating of 3/5 stars, although that's being generous.

The spine-tingling 1978 Australian horror movie directed by Richard Franklin and Everett De Roche is back. Patrick was just too good a film to be ignored so it was only fair to give this film a makeover and place Charles Dance as the sick and twisted Doctor Roget in Robert Helpmann’s shoes.

Patrick: Evil Awakens is the brand-spanking new 2013 edition that’s directed by Mark Hartley. The cast is pretty impressive as it stars actors, such as: Charles Dance, Sharni Vinson and Rachel Griffiths. However, as much as we love Charles Dance, we cannot help but wonder how different the film could have been if Richard E. Grant had have taken the role as Dr. Roget. Fortunately, Grant turned down the offer due to a schedule conflict.

For those who don’t know the fantastically twisted plot, Patrick is about a young comatose patient who had murdered his mother and her lover years before being admitted to a private psychiatric hospital; Patrick is enigmatic Dr. Roget’s human guinea-pig and is subjected to his cruel, gruesome and undeniably warped experiments. However, when a young nurse starts working for Roget, she becomes entranced in Patrick and believes that, despite being in a coma, he is trying to make a connection with her and to test her theory she whips her computer out. Low and behold, Patrick has psychokinetic powers but this doesn't mean it ends here… this is just the brief explanation of the story; Patrick’s feelings for this nurse get as strong as his powers, which become very obsessive, which causes quite a lot of havoc and danger.

Patrick: Evil Awakens has provoked a lot of attention and has been admired by cinema goers and horror fanatics. It has been branded one of the most memorable and well-crafted remakes of the 1978s version with also ultimate praise for its excellent graphics and effects.

However, others who are not a fan of remakes have criticised it tremendously as they feel Patrick should not have been adapted into this ‘gothic’ film with a bunch of actors who have distorted the original slightly. There are many similarities but equally as many differences to the original, which is as bad as making a film version of a book.

For those who have never seen the original, it is worth your while watching this film as you won’t run the risk of being disappointed. However, for those who have, yes there are minor dissimilarities but overall it is an enjoyable film with thrills, gore and more. The cast is phenomenal and the graphics are sensational; what more could you possibly want? And besides, it is the 21st Century, films are meant to be slightly ruined with refurbs. Postman Pat is now 3D and no one even remembers the original Dr. Who episodes!

Just don't watch it before you go to sleep.