Rent The Man Who Invented Christmas (2017) 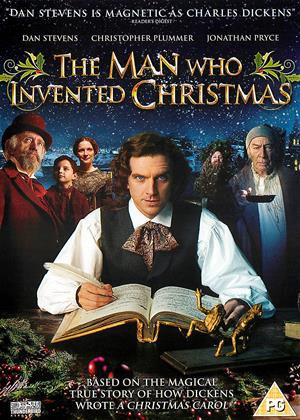 Rent other films like The Man Who Invented Christmas

Reviews (5) of The Man Who Invented Christmas

Disappointing, fabricated, inaccurate, psychobabbly origin-story of Scrooge to the US market - The Man Who Invented Christmas review by PV

2)Goose was what they had on Christmas Day in the 19th century (it's even at the end of the story when Scrooge sends a boy to buy the biggest goose at the butchers for Tiny Tim and his family!);

3)Dickens did not have a teenage Irish servant/main who came up with the idea of Scrooge from an Irish myth (this movie is an Irish Film Board/Canadian production!); no doubt emphasised to appeal to Americans...

4)Christmas trees became popular after an illustration of Queen Victoria and her German husband with one at Buckingham palace BUT before then, British homes WERE decorated with evergreens such as holly, ivy, mistletoe and pine boughs, hoisted up in the top corners of rooms (as in Deck the Hall - NOT Halls, by the way - it's an old Welsh folk carol called Deck the Hall!(. Dickens wife was a famous spendthrift, which was the entire reason Dickens had to go on tours of America to make money to keep up with her shopping bills! She was no angel, as portrayed here!

5) Charles Dickens DID work in a blacking factory (on the Hungerford steps near Charing X station in London) aged 12; he then escaped that by becoming a journalist covering court cases who was well known for his massive work ethic (which killed him in the end from a stroke aged 58 in 1870). So his rejection of an alternative journalistic career to Forster (his biographer who I very much doubt sounded like a comedy Geordie in real life!) is utterly absurd. He was a SUCCESSFUL author by the 1840s, NOT a failure or a flop. He did have an expensive wife though, and had to tour the USA to make money to fund her shopping habits AND to counteract the lax US copyright which meant cheaper shorter copies of his stories under other authors' names came in days after his own novels were published (often in serial form in magazines AND with illustrations - always). The British copyright laws were better back then - and now, arguably.

6) Finally, Dickens like all writers would have spent hours thinking through his story AND certainly would have written the ending in his head very early on, so this is all fabricated really, to make a good movie and a book before it. Dickens wrote standing up (after drinking a pint of Champagne at midday every day!) but that hard effort and work is what created A Christmas Carol, which was one of 5 Christmas stories Dickens wrote in the 1840s - The Chimes, The Haunted Man, The Battle of Life and The Cricket on the Hearth are the others (I have read them all and would recommend people only read A Christmas Carol which is a BRILLIANT story): http://mentalfloss.com/article/521782/4-dickens-christmas-stories-youve-probably-never-heard

A good cast though. I particularly liked Charles Dickens ever-hopeful always-failed-small-businessman father. BUT how can the ghost of Christmas past NOT be an old man? To make it a teenage girl is daft.

WAY too much emphasis given to Dickens' wife (who was apparently AWFUL) and the teenage Irish servant girl who is a total fabrication.

It's all too American psychobabble and pc for me, but one has to be grateful for small mercies - tat least they didn't 'diversity destroy' it, and thankfully no family characters were black, as in the absurd and preachy pc Dr Who. Some silly modern turns of phrase in this too which made me wince.

BUT if you want to watch a movie, then rent out Scrooge (1951) starring the brilliant Alistair Sim. Watch that, NOT this.

AND DO READ A Christmas Carol too - it is not a long book, a novella or even short story in 5 parts (staves) and works SO well read aloud, especially in a group of family and/or friends at Christmas.

Christmas wasn’t fun, this looks like a job for….Super Author! - The Man Who Invented Christmas review by DS

Dan Stevens is a charming and charasmatic presence as Charles Dickens in The Man Who Invented Christmas but he is given a tough task, he has to portray a man in the midst of the creative process and a creative process that is blocked. In real life this is staring at a wall for most of us and doing lots of the things that come under the heading of procrastination. To make it entertaining Stevens has to play this type of dry spell like it is coursing through his veins like some stimulating drug rather than something that drags you down. For the sake of a screen version of this story it has to be this way, otherwise you have a dull film. Stevens plays this role perfectly and is the anchor that makes the film an enjoyable watch.

Fortunately the film is populated with some excellent British acting talent lead by the unredoubtable Christoper Plummer, Johnathan Price and Simon Callow although Callow is close to being a cameo as Dickens famed illustrator John Leech. I think he is contractually obliged to act in all Dickens passed films or TV shows. Having 'favourites' I was pleased to see Justin Edwards and Miles Jupp (Thackeray) popping up during the storyline so I am biased.

There is a good mixture of comedy sprinkled throughout the running but it is part of the story and not the overriding reason for the story. The story, whilst seeming original, is in fact close to Shakespeare in Love with events and people in Dickens life shaping his latest story. The method is different, yet not original, where the characters Dickens is creating appear and interact with him. On the plus side this could have been very clunky but director Nalluri and the actors handle is well and smoothly. It was fun.

The film definitely assumes you have some working knowledge of Dickens and his novels but this is in fact a plus point. There is no hand holding here or one-hundred weight exposition crushing the proceedings. The story leaves us in no mind that Dickens reinvented Christmas soley through Christmas Carol but does not really explore how Christmas was celebrated before then, other than nearly all bosses appear to be Scrooge clones, so much so that getting inspiration should not have been that hard for the author. These are all piffling points and you should not really go into the film looking for an accurate depiction of Charles Dickens or the times, that is another film.

The Man Who Invented Christmas is fun, well acted, film but like many in this type of category you watch it and enjoy it but it's soon forgotten.

Quite clever interpretation of a writer's dilemma. Not sure the actual CD was an upright gentleman as depicted. His extra maritals being fairly well documented, but nice to see Chris Plummer in his forte again, and stealing the film at 90 odd!

Magical, moving 'backstory' for 'A Christmas Carol' - The Man Who Invented Christmas review by IanF

A really lovely drama imagining the pressures the literary superstar Charles Dickens was under following two novels that failed to sell by the truck load. Gives a touching picture of how difficult life was in the early Victorian era. Dickens really was born in the workhouse to a spendthrift father.

I didn't enjoy Dan Stevens' portrayal of Dickens but otherwise there were characterful performances not least from Christopher Plummer and the scenes of early Victoriana looked authentic (and expensive!). One wonders, however, whether there was really a story worth telling here, we've had so much Dickensian drama from the BBC and others over the years.The stories told by his books are better I think than the story told by the film.