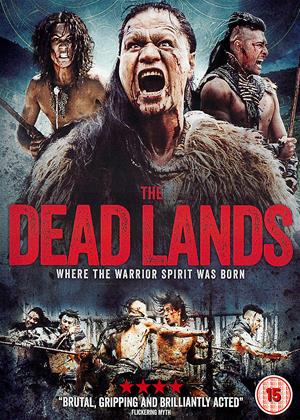 Reviews (1) of The Dead Lands

Like Ten Canoes (Australia) and Apocalypto (Brazil), The Dead Lands gives us couch potatoes an action packed introduction to the tribal mores of the Maori warriors of NZ. This pulls no punches and is a gripping, moving and devastating watch. James Rolleston (Boy / The Dark Horse/ Goodbye Porkpie (2018)) plays a young man that encourages a disgraced cannibal warrior, played by Lawrence Makoare (LORD OF THE RINGS trilogy / JAMES BOND - DIE ANOTHER DAY) to avenge his father's tribe after their murder by an ambitious yet deadly chieftain, Te Kohe Tuhaka (6 Days / Sione's Wedding 2). Like the CP review, at face value, this may seem like a Kiwi version of Apocalypto, but it diverges from that film's streamlined plot ethic and offers something a little more instructive in the way tribes would interact and the importance of storytelling, honour and legacy. It's a shame so few films from NZ make it out to the UK for a wider release, however this one did have a limited run at our cinemas back in 2015.

Recommended for the excellent performances (Makoare in particular - who usually only gets to play monsters!) and the superb fighting. Look out for NZ acting royalty George Henare (RAPA NUI) and Rena Owen (ONCE WERE WARRIORS) in cameo roles.

Toa Fraser is a superb director - check out his films, he's a Kiwi stalwart like Lee Tamahori and Roger Donaldson.

At first glance, The Dead Lands appears to be the New Zealand equal of Apocalypto. But whereas Mel Gibson was doing his best to define the Mayan people, there’s a stronger connection to the savage history of the Maori with this movie. It’s not just that it was shot with a Maori cast and crew in the native language. There’s a deeper understanding of the culture and mindset built around an era of violence and honor. It manages to be just a little more engaging for what’s essentially a savage and bloody revenge movie of tribe-versus-tribe.

Director Toa Fraser wastes little time introducing us into this world. It’s a familiar one with tribes who find honor in death and fear of the spirits. Hongri (James Rolleston) is a chieftain’s son willing to give his life to preserve peace between tribes. But the rival tribe led by the evil Wirepa does not share the same superstitions or dignity. Consumed by a berserk sense of conquering, Wirepa thinks nothing of desecrating elders, pillaging villages and treading into forbidden zones. Sick of playing the game, he finally lays waste to Hongri’s tribe with the chieftain's boy being the primary survivor. Naturally, he must avenge his decapitated father with great vengeance, especially the way Wirepa carries it around as a trophy.

While Hongri is a plucky enough fighter, he seeks help within the forbidden “dead lands”. Deep within these foggy woods exists the legendary dark warrior known as...The Warrior (Lawrence Makoare). He is a vile and bloodthirsty beast who rules his land as a cursed protector, believing that he cannot die thanks to the cold stares of his ancestors. The Warrior reluctantly agrees to teach Hongri his destructive ways of dispatching enemies which leads to the obligatory montage of training. This, in turn, leads to the brutal fight scenes of two warriors taking on many.

But before the film delves into the gritty brutality, there are just as many scenes that dig a little deeper into the nature of such a world. The more time Hongri spends with The Warrior, the more he begins to see a psychotic reaction to the flaws of both himself and the culture of violence. The Warrior constantly refutes the dignity of death in that there is no honorable way to die. Death is just death or so he wants to believe. It’s a strange aspect of the character that forces Hongri to take a harder look at the dark path he seeks to go down.

Okay, now let’s get to the bloody carnage. The Maori tribes assault one another in deadly displays of force with pikes and other blunt instruments. Each scene is punctuated by both savage beatings and an exceptional range of camera work. Sometimes we’re right in the middle of the fight with a hand-held format and other times we can see it all in beautiful long shots. All of this helps keep the battle looking gorgeous in the astounding glory of New Zealand. There’s a genuine thrill to the psychopathic nature of the warriors of out for blood. The Warrior’s eyes bulge and he licks his lips as he welcomes more and more bodies to slay. You just can’t take your eyes off such an unforgettable performance from Lawrence Makoare who cackles in combat and breaks down in the privacy of swamp and spirits.

Credit should be given to James Rolleston who meshes well into the role of Hongri. He puts up with quite a bit of abuse and slowly builds towards being a more powerful figure. I especially dug the sequences where he comes to terms with the visions of his grandmother from the other side - urging him on to find retribution. It may be played up a little heavy on the spiritual side the way she appears to him in a void of green stars, but it helps paint a pretty picture for a film that otherwise could have been bleak and dreary.

The Dead Lands is no doubt a gnashing and blunt action picture with a simple structure, but it still packs an entertaining and surprisingly emotional punch. There’s much more of a unique perspective on the mentality of warriors in a picture that could have just been fight scenes for the hell of it. Here is a film that may not give us an exact reason to care about its characters, but a reason to ask why they kill with some answers presented. It’s not exactly the most stirring or exploring of such concepts around honor and shame, but it’s very much a welcomed ingredient to this bloody tale of tribal revenge.