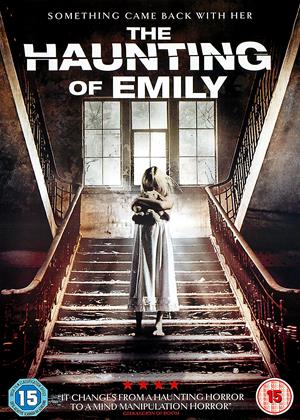 Synopsis:
After being missing for over a year, little Emily has mysteriously returned home to her family. There are no clues to where she has been and the events of the past year are still a mystery. As days pass, strange events begin occurring, and it becomes clear that when Emily returned she did not come back alone. Something evil came back with her, and it will lull anyone who tries to discover the truth.
Actors:
Nathan Polzin, Jolene Kay, Taylor Pigeon, Shalaina Castle, Chris Gann, Shawn O'Malley, Sam Spade, Fabian Alomar, Jim Collins, Elizabeth Colunga, Tony Cuviello, James Duval, Zachary Haas, Melissa LeEllen, Sarah Mandell, Bojan Micic, Danny Minnick, Arthur Reznik, Bret Roberts, Kaley Victoria Rose
Directors:
Jared Black
Producers:
Stacey Black, Ben Shani
Writers:
Jared Black, Thor Wixom
Aka:
Delirium
Studio:
High Fliers Films
Genres:
Horror, Thrillers

Reviews (1) of The Haunting of Emily

Interesting but frequently incomprehensible - The Haunting of Emily review by NP

Originally released as ‘Delirium’, this was retitled ‘The Haunting of Emily’, presumably to kindle the interest of those who enjoy the current steady spew of films featuring the demonic taunting of young girls.

The actual haunting of Emily (Taylor Pigeon) is pretty peripheral to the story here. The girl goes missing, and when she returns, cannot speak, and has clearly brought ‘something’ back with her. Perhaps the word ‘clearly’ is ill-advised, because little about this story is clear.

I like films, especially horror films, which leave certain events unexplained. It makes me think the people making the film are keeping some secrets to themselves and I can only guess what those secrets are.

But this is largely incomprehensible. Lots of intense acting, screams and flashbacks, and then it ends. It’s nicely shot, features some moody lighting and music, but the plot is too muggy for me.

Having said that, I’ll be watching this again to see if I can make sense of it. There’s a chance it will all be clearer the second time around and make sense, in which case I’ll be editing this review. But I’m not putting money on it! Interesting. My score is 6 out of 10.