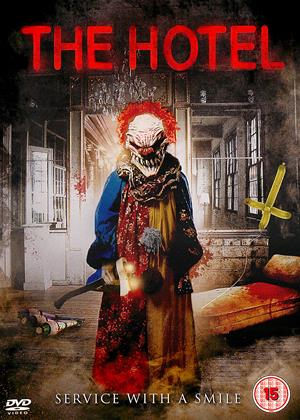 Reviews (1) of The Hotel

Anthology films are somewhat scarce recently, although ‘Little Deaths (2011)’ and ‘ABCs of Death (2012)’ have been the more notable exceptions. And so to ‘The Hotel’, which features three stories within a framing narrative concerning paranormal investigator Eddie Osbourne staking a hotel with his new videographer. It’s worth pointing out that this strand features the least effective moments in the film.

The first tale concerns newlyweds Michael and Lana (Carson Nicely and Miranda Parham) moving into a house that appears to possess them. Nothing new in that, but it is played in engaging fashion by the two leads, and contains a few sinister moments before a weak ending.

Retribution plays a part in the second piece, a Jason-like story about a bullied child dressing up as a clown and getting his own back on his childhood aggressors.

An astonishingly dim film crew of three decide to record a hoax documentary concerning ‘Bigfoot’, and actually record themselves creating fake footprints in the foliage! A real life cannibal, played by Rodney Osborne takes advantage of the three youngsters’ stupidity by eating them …

… so it’s no surprise to find that Eddie is himself a revealed to be a cannibal who has lured Will to the hotel in order to eat him – however, in a terrifically unexpected reveal, the killer clown from story two turns up for the finale. The message is that if you surround yourself with negative energy, it will soon consume you.

This is good fun, obviously filmed on a micro-budget, and contains a vein of dark humour that makes up for any acting/production short-falls. The camera turns away from any gore, but there are some frightening moments – the shadow man from story one, the physically intimidating clown from story two, for example. There is an abundance of atmospheric from Director/writer Derrick Granado.