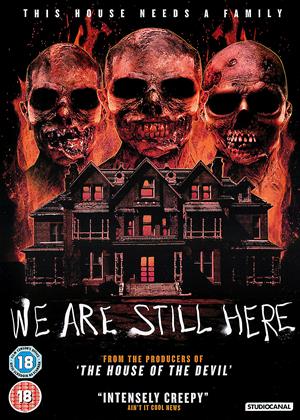 Synopsis:
After the death of their college age son, Anne (Barbara Crampton) and Paul Sacchetti (Andrew Sensenig) relocate to the snow-swept New England hamlet of Aylesbury, a sleepy village where all is most certainly not as it seems. When strange sounds and eerie feelings convince Anne that her son's spirit is still with them, they invite an eccentric, New Age couple (Larry Fessenden) to help them get to the bottom of the mystery. They discover that not only are the house's first residents, the vengeful Dagmar family, still there - but so is an ancient power. A primal darkness slumbers under the old home, waking up every thirty years and demanding the fresh blood of a new family.
Actors:
Barbara Crampton, Andrew Sensenig, Lisa Marie, Larry Fessenden, Monte Markham, Susan Gibney, Michael Patrick Nicholson, Kelsea Dakota, Guy Gane, Elissa Dowling, Zorah Burress, Marvin Patterson, Connie Neer, Samantha Buckman, Richard Barry, Edward Prunella, Jill Burress, Paul Burress, Michael Conolly, Dave MacLean
Directors:
Ted Geoghegan
Producers:
Travis Stevens
Writers:
Ted Geoghegan
Studio:
StudioCanal
Genres:
Horror

Reviews (2) of We Are Still Here

very bad - We Are Still Here review by me

Mild Spoilers ... - We Are Still Here review by NP

When a middle-aged couple Anne and Paul Sacchetti (Barbara Crampton and Andrew Sensenig) move into an isolated, creepy looking house, in a film called ‘We Are Still Here’, it’s no great surprise to guess what will happen.

I love horror films that use natural elements to underline a sense of isolation. Fog, sea, rain, nightfall – or a neighbourhood in the icy grip of snowbound winter, as here – all provide a background of seclusion. The Director (and writer) Ted Geoghegan makes great use of this, generously using imagery of icy branches, frosted pathways or snow blown like smoke by gales across fields, which really promotes the atmosphere, as inside the house, things begin to get creepy almost from the get-go. One moment we are treated to a build-up of a ghostly nature; the next, a sedate panorama of the whitened beauty of the environment.

At first, delving so soon into early frights seems like a mistake. Eerie noises, disowned footsteps, shadows moving of their own accord – all these flourishes aren’t particularly effective when we don’t know the characters they are inflicting themselves upon, or indeed any kind of backstory. And yet the pace does not dissipate. Things get progressively bloodier. Other characters are introduced, and if they are lucky, they are not graphically killed by blackened, glowing-eyed dead things. And by this time, we have learnt enough about the main couple - that they are still grieving over the loss of their son, and that they think the spirit in the house may be his – to invest empathy in their fate.

One thing that sets this film apart from many others is that the main characters are middle-aged. The young couple, when they arrive, don’t last for very long before they are despatched, their bodies never found or mentioned in the narrative again. And yet events occur at such a pace as the story moves on, there is little time to take stock.

Explanations are brief and scant. We learn that the house may have been built upon an ancient burial site, was owned by the Dagmars, and that they used the place as a funeral home and sold the corpses. Whatever the explicit reasons, there’s more than enough ghoulishness within the premises to make reasonable the current hauntings.

The superb score is composed by Wojciech Golczewski, and was released in 2015.