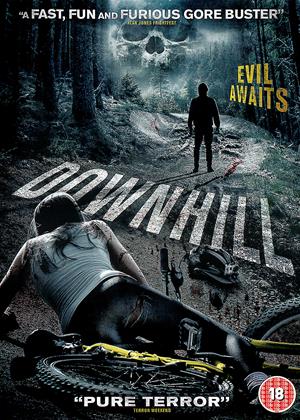 I quite like people. They are prone to do silly things. Some of them wear tiny protective helmets, hop onto bicycles and drive really quickly over rough terrain – often, like the young people in this film, risking accidents that can cause huge discomfort, possibly death. It amuses me that people put themselves through this for the name of ‘sport’ or even ‘for a laugh’, but then I speak as someone with no athletic prowess whatsoever.

The production of a horror film with this premise promises something different at the very least, which is refreshing. Joe (Bryce Draper) and Stephanie (Natalie Burn) are fairly likeable leads (although the acting from some supporting cast members is questionable), and when they take part in a Chilean biking exhibition and discover a man dying of a strange virus, we know things aren’t going to be easy for them. And you wouldn’t expect their cell phones to work as they get further out into the wilderness, would you? However, that is about the only predictable development on offer here.

“Why do you have that thing on me? You’ve been shoving it in my face all day.” Stephanie points out early on. Luckily, she’s talking about Joe’s webcam, and so it seems that this will be, in part at least, ‘found footage’ in style. A well-used subgenre for sure, but one that is still effective if utilized well. Again, that is only a fraction of what ‘Downhill’ offers us.

Things become surprisingly nasty surprisingly quickly. They drift into Lovecraft territory a little too, which gives you some idea how darkly bizarre ‘Downhill’ is. I should stress that this project doesn’t ever try and rewrite the horror film (why should it?), rather it re-writes *itself* every so often. It is really a ‘hunted/slasher’ film in style for the most part. But within that category, it provides a deliberately jarring series of events that wrong-foots the viewer in such a way that it never slides into dullness. It is also worth saying that, during the last twenty minutes or so, things become utterly demented.

Director/co-writer Patricio Valladares and Luigi Seviroli, who provided the unnerving soundtrack, should be very proud of this gem.